STOP! HAVE YOU READ?

Containing an Outbreak in the Age of Social Media

Over the course of 2 years, disease surveillance staff made more than 226,000 premises visits and coordinated more than 11,000 laboratory submissions. Approximately 2,400 premises with a total of 1.2 million birds were depopulated either because they were infected with vND or because they were linked to an infected premises; the majority of these birds were from commercial farms, while the majority of premises were non-commercial. Approximately $6.7 million of indemnities were paid to producers; $3.7 million to commercial producers and $3 million to backyard flock owners8; the total cost of the response was likely at least 2 orders of magnitude higher. USDA had more than 150 personnel deployed, including a rotating Incident Management Team to assist CDFA. All told, more than 300 State and Federal employees responded to the outbreak.  While it was a difficult and drawn out response, by June 1st, 2020 the WOAH once again granted the United States vND free status and the major objective of the response had been realized.

One of the aspects of this outbreak that make it such an interesting study is that it was very similar in geography and ecology to the 2002 outbreak. Furthermore, many of the individuals who were part of the 2018 response had also been a part of the 2002 response.  However, there were some ways that the two responses differed. The 2002 outbreak enjoyed broad support from the news media and state/federal government agencies, whereas in 2018 there was less support from these resources.  For instance, in 2002 the governor of California issued a disaster declaration, whereas in 2018 no such declaration was issued.  In the wake of 9/11, there were more funds and personnel available from USDA to staff the outbreak response whereas by 2018 these resources were less abundant.10 However, there were also societal shifts that took place between the two events that may have influenced the ability of the CDFA to respond; the most conspicuous being social media. It’s hard to quantify how much of a role social media played in hindering or helping the responses to these disasters, especially when comparing the groups like SOB to prohibited exhibition activities, but it was certainly a factor, and will likely continue to be a factor in disaster response going forward. However, perhaps the most overarching theme that was made apparent through the challenges of this most recent outbreak, is that government organizations cannot effectively respond to emergencies or disasters without the public’s cooperation. If there is not broad public support for mitigation efforts, they will be viewed as onerous at best and draconian at worst.  Gaining that support requires outreach, education, and a working knowledge of the ways that information is shared.  When one considers the scope and complexity of containing an outbreak of a highly contagious pathogen such as vND in a dense, urban landscape such as the Los Angeles Basin, that affected such a diverse demographic in a potentially hostile environment, the fact that CDFA and USDA were able to restore vND free status to the U.S. poultry industry in the time frame they did is nothing short of astounding. 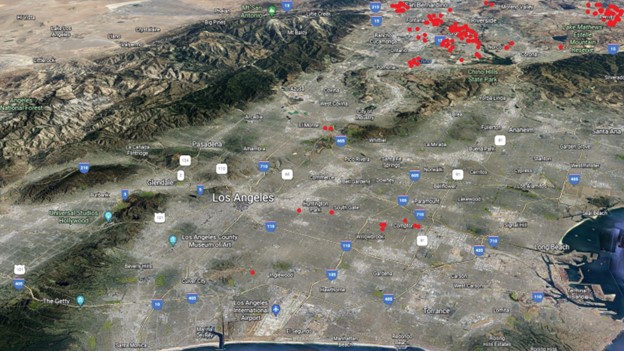 Each red dot represents the approximate location of a positive case