All In/ All Out Managment Systems

Atrophic rhinitis is a disease in swine that developed in the US in the 1940s because of the expansion and intensification of swine production. Atrophic rhinitis is a multifactorial disease caused by toxigenic strains of Bordetella brochispetica and Pasteurella multocida resulting in nasal turbinate atrophy and deviation of the muzzle. The disease established asymptomatic carriers which can pass it on to other members of the herd. Carrier sows spread the disease to their piglets who can transmit it to other individuals. New introductions can introduce new strains to a naïve herd. Older infected piglets may not grow as well and may be held back in the nursery and serve as a source of disease for younger pigs. In an effort to control and mitigate the spread, producers turned to an old management system, all in/all out.

All-in/all-out management moves individuals through a production system in groups. The goal is for susceptible groups to move out of a location before a disease organism has time to build up or transfer from another group. Movement allows for cleanup and a rest period between groups. In this system, groups are separated by age and caretakers work with young groups before moving to older groups. Separate buildings or strong fences are required to prevent individuals from wandering into other groups and accidentally introducing disease.

Most operations function as a continuous flow system in which individuals are moved instead of groups. This prevents a facility from being totally empty. Operations can practice an all-in/all-out system to mitigate disease transfer and risk. First, animals of similar age, such as weaned kits or cows, or production stage, such as breeding does or cows, should be grouped together. Grouping dams that will give birth within 2 to 7 days of each other automatically groups their offspring. Grouping allows nutrition to be tailored to meet the needs of that age/production stage. 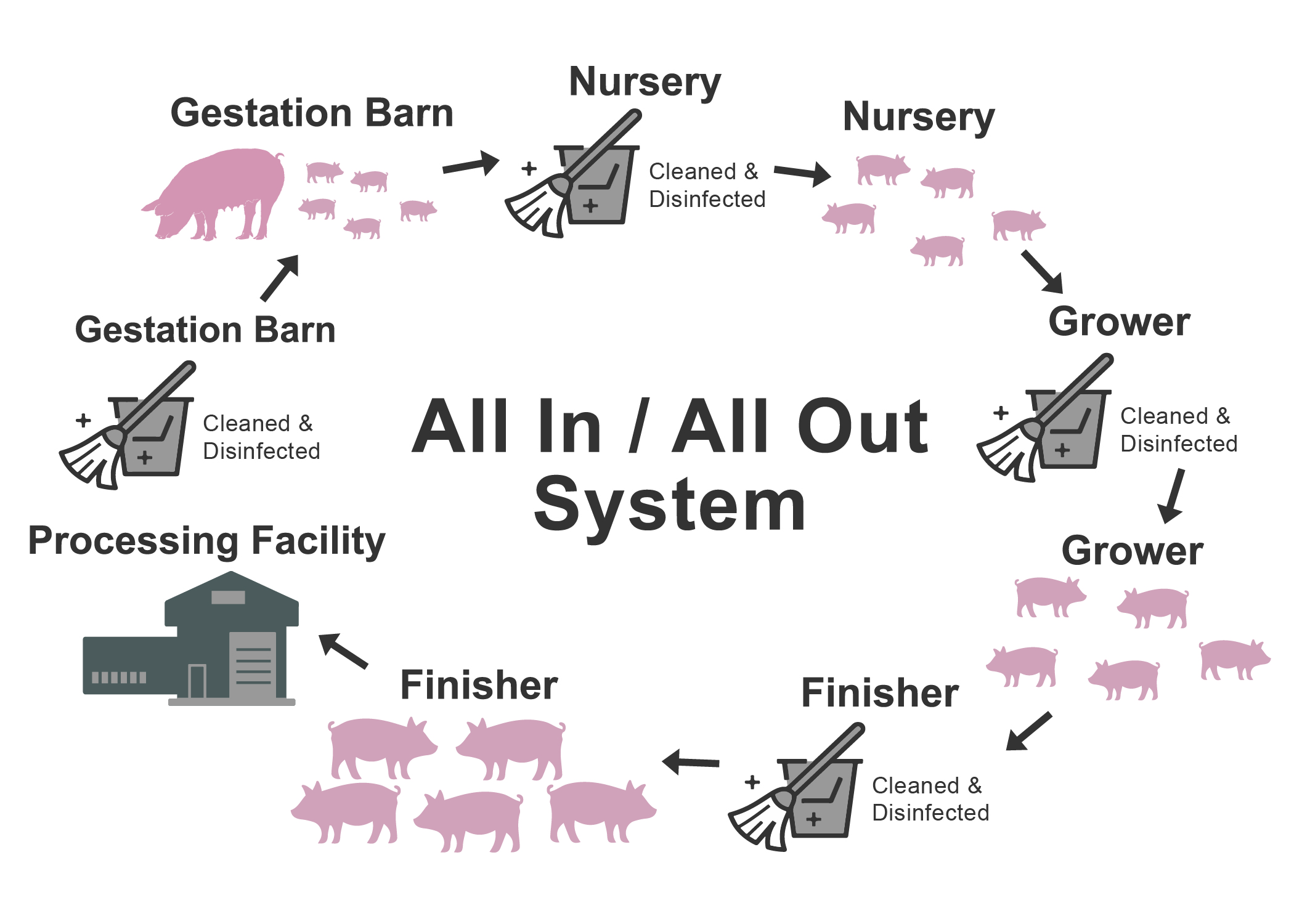 All In / All Out Management System.

Second, groups made up of young, healthy, or pregnant individuals should be tended to prior to mature groups. Young and pregnant groups are at higher risk of disease than mature groups. Diseased groups should always be tended to last to prevent caretakers from accidentally transmitting sickness to healthy groups.

Third, when a group leaves an operation, their enclosure can be groomed, cleaned, or disinfected and allowed to sun dry. By managing herds in groups, cage/pasture management and disinfection can occur at frequent intervals. Equipment specific to a location or pen, such as water lines, can be checked to maintain things in proper working order.

All-in/all-out management systems is a risk mitigation method that allows for grouping of like animals, tailored nutrition to a production stage or age, and easier on-farm disinfection and maintenance.