This article will discuss common phrases associated with TNR programs, the process of performing TNR procedures, and some of the reasons a community may benefit from such programs.

These are all common phrases or terms that refer to the same thing—a cat that has been trapped, surgically altered so no offspring can be produced, and returned to the outdoors. Most often, these cats are not socialized to be a pet in a home. Though they may be fed or cared for by an individual or group, but these cats are largely self-sufficient in their environment.

Most candidate cats for TNR are older kittens or adult cats that roam freely throughout a community. This also includes non-socialized cats entering animal shelters that are not considered adoptable.

Many commercial traps are available in different styles and for different sizes of animal. 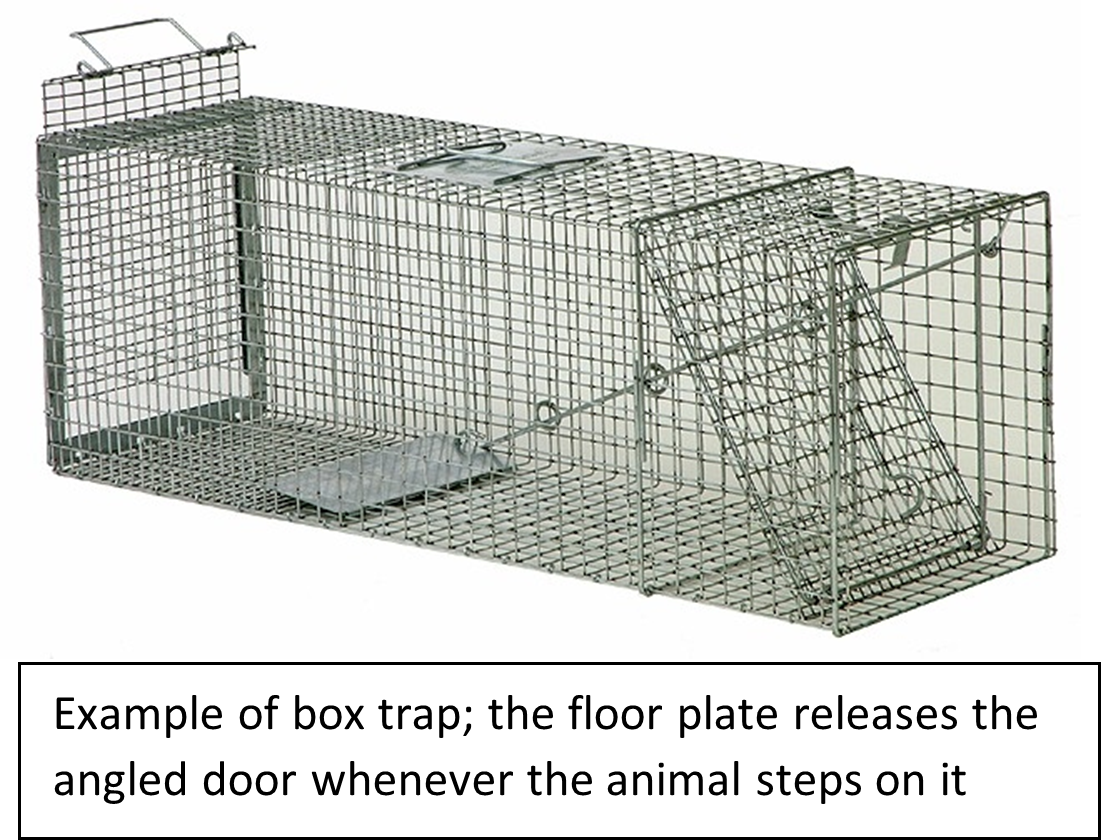 The trap should be selected so that the cat has enough space to lay down, stand up, and turn around inside the trap. The selected trap should allow for the animal to be safely removed from its location and transported elsewhere without an individual having to touch the cat. A trap like the box trap (pictured) is preferred because it allows the cat to be sedated or anesthetized without handling or removing it from the enclosure. Traditional cat carriers (soft mesh or solid-walled) and wire crates do not usually facilitate easy handling of unsocialized cats—these should be avoided for the use of trapping and transportation in order to protect both the animal and all handlers.

The most important aspect of trapping non-socialized animals of any species is to never use a “trap” that does not protect the trapper.

When setting up a trap for a cat, making it appealing will give the best chance of a successfully caught cat.

The cat is surgically altered—either spayed or neutered—by a veterinarian. Often, at the time of surgery, TNR cats are vaccinated against rabies, given a dose of flea and tick prevention, and feasibly treated for medical conditions as they are noted.

Two identifiers are used so that either method can be used to confirm the cat’s altered status and help avoid future manipulation of the cat. The ear tip is usually only used in released cats, not household pets, because it is an identifier that can be seen at a distance and does not require handling of the cat.

When the cat recovers and is alert, it may be released back to the environment. The term “trap-neuter-return” refers to the release of the cat back to the same area it was captured. “Trap-neuter-release” is terminology more commonly used when the cat may not be safely released back to the same area of capture, and it needs to be relocated in a new area. Reasons to relocate the cat may include hazards such as busy streets, predators, or construction zones. Local legislation may also dictate where animals can be legally released. If relocation is necessary, providing food and clean water sources can incentivize the cat to remain in the desired area.

Stray or feral cats are frequently seen as a nuisance due to scavenging for resources, territorial marking behavior, and inter-cat territorial aggression or fighting. Additionally, cats are natural predators that prey on small mammals, rodents, and birds when allowed to roam freely. Trapping, spaying/neutering, and returning cats to their environments stabilizes the population by preventing reproduction and reducing movement of other cats into the community. This method may also reduce territorial behaviors among the colony of cats in the area.

Other resources for learning about TNR programs are listed below: