The most common limb abnormality in calves

Contracted tendons are the most common limb abnormality seen in newborn calves.  They cause the legs to be flexed in position, or knuckled over and make it difficult for the newborn calf to stand and to nurse.  Contracted tendons have several potential causes, including physical, genetic, nutritional, or viral in nature.   In most cases, contracted tendons are a physical consequence of a large calf that may have been forced to keep its legs in a flexed position during the last few weeks of gestation.

Treatment for contracted tendons depends on the cause and the severity of the limb flexion.  The earlier these calves are treated, the better the prognosis will be.  In mild cases, simply flexing the limb manually several times a day can stretch the tendon enough that the calf can put the tip of its hoof on the ground.  In some cases, the affected limb must be splinted or put in a cast to keep it extended until the tendons stretch out.  More severe cases may require surgery to cut or release the flexed tendon.  Care should also be taken to ensure the calf can stand and nurse.  Be sure to consult your veterinarian if you have a calf born with contracted tendons to rule out genetic, nutritional, or viral causes of limb abnormalities which may affect the rest of your herd. 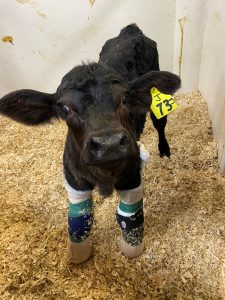 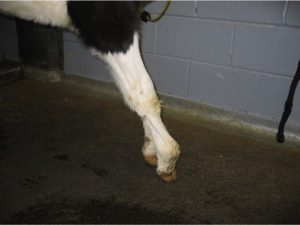