It should be no secret that I’m a fan of dollarweed. It lives in wet areas near the beach, which I’m also a fan of. So that means doing research trials requires locations near the beach, where there is fresh sea food… You see where I’m going with this?

But to be honest, I like the look of it. It’s different than grass, but has some cool characteristics, like spreading via stolons and rhizomes. It doesn’t produce big showy flowers often, but when it does, they’re this sort of compact umbel (like an umbrella).

This season, I found dollarweed in the pond near my house before I found it in turf. It’s a native, sort of. There are about three species of Hydrocotyle found in northern MS and possibly five to six along the coast. I can’t really tell them apart unless there’s a flower, and even then, I’m pretty much useless. I’ve seen great examples of this “weed” used as a ground cover down in the tropics – places like Cuba and the Virgin Islands. It’s definitely got some utility as such, but most folks just want to kill it.

For the average homeowner, what kills it is very often what’s easiest to find at the average lawn and garden store. Several products are mentioned in the publication linked below. A new formulation of Scott’s Bonus S with metsulfuron-methyl came out earlier in the year. That’s a great herbicide; although, it is by no means the only product out there that controls dollarweed.

The old formulation had atrazine in it, but atrazine application is being “phased out” in Florida, so we’ve started to see our own product lines shift to reflect those regulations. In trials at Biloxi last year, we saw increased control from the newer formulation. MSM-turf contains the same active ingredient but requires liquid application.

Keep on the look out for more new products aimed at homeowners for this and other troublesome turfgrass weeds. 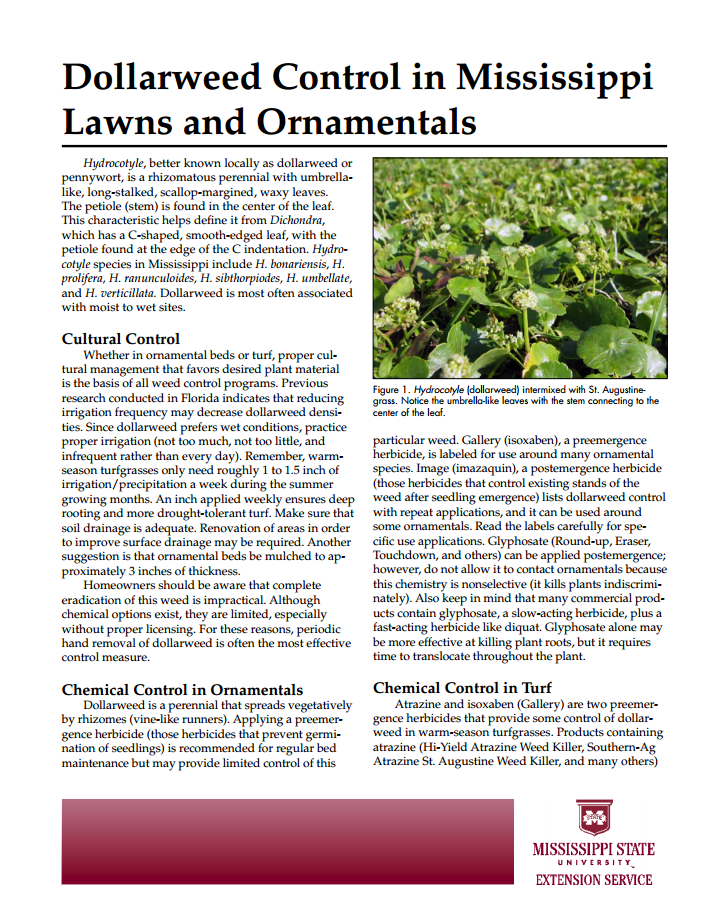