Turf managers across the Southeast are all aware that temperatures in 2014 have been lower than winters in the recent past. This has brought about renewed concern for winterkill of bermudagrass.  Will the turf survive the winter? Will spring green-up be delayed? Will replanting be necessary?  Research conducted at Mississippi State University has shown that newly planted bermudagrass is more susceptible to winter injury than mature stands. Seeded varieties, when planted in May or June, had a better chance of surviving the first winter than when seeded in July through September.  If you don’t wish to wait for spring to find out, perhaps there is a faster way to estimate the damage.  Bring turf samples indoors today.

At MSU a new bermudagrass variety trial was planted on June 28, 2013. This experiment contains 35 varieties (17 were planted vegetatively and 18 were seeded).  The plots were visually well established before fall dormancy. Then, just like probably many of you in the middle of this long winter, we started anticipating.  Our low temperature here was 8 degrees. Will we have to replant?  We decided to sample.  On February 19 we pulled one two-inch plug from each plot of one block of the field experiment. We set these plug samples into pots filled with sand and placed them in a 75 degree greenhouse (photo 1).  On February 26, after one week, 31 of the 35 plugs samples were displaying at least one green shoot (photo 2). After two weeks, on March 5, 33 plugs had shown new growth (photo 3).  The two samples that have not yet shown signs of life are from seeded varieties.

Of course this sampling exercise was not a scientifically valid test for winter survival. The real test will come later on this spring when each entire plot is rated for percent survival.  This is a good indication however that the experiment will not need to be completely replanted. We can rest a little easier. Good luck to all you real turf managers out there who are losing sleep over the threat of winter injury. 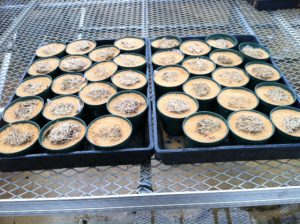 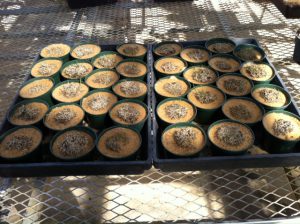 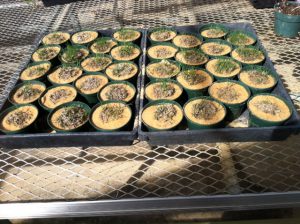