As most of our early (March) planted corn acres begin to tassel, the question always comes up about the optimum timing for the “Tassel Shot” of nitrogen.  According to Mississippi State University crop specialists, if your corn crop is healthy with adequate nitrogen, then the timing of nitrogen application at tassel is not very critical.  However, if you are nitrogen deficient prior to tassel, then it is very critical that you correct this before your crop reaches tassel where nitrogen  needs are quite high.

For a more detailed explanation on timing your “Tassel Shot” follow the link below.

For most of us, spring and early summer bring about images of gobbling turkeys, crappie fishing, baseball games, colorful landscapes, barbecues, and emerging crops.  But, very 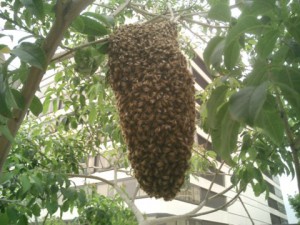 few of us relate this time of year to honeybee swarm season.  I would even bet that most of us have never witnessed a honeybee swarm in flight or clumped up dangling from a branch.  For this very reason, it is a fascinating and mysterious phenomenon.

The sight of swarming bees can certainly cause nightmares for some people.  However, it is a very natural behavior that honeybees exhibit during late spring and early summer.  Swarming is nature’s way of propagating the species.  With the recent decline in commercial colonies, scientist and beekeepers alike, suggest allowing a beekeeper to capture swarms that you encounter.

A honey bee colony declines in numbers throughout the winter as its food stores are depleted.  Now, there are far fewer bees in the colony than there were in the summer.  The colony will likely have a queen, 15-20 thousand worker bees, and no drones (they get the boot in the fall to conserve food resources).  At this point in late winter the bees will be huddled around remaining food stores to keep warm.

As the days get longer and the temperatures warm, the colony expands.  The queen is busy laying eggs to produce more workers and eventually drones.  The colony is extremely efficient and may have 50-80 thousand workers foraging, building comb, regulating hive temperature, guarding the colony, tending to brood or feeding the queen.  This entire process is communicated through pheromones and this is very important to remember when understanding the swarming process.

So, the colony is working hard and the queen is busy laying to produce more workers.  Now there are thousands upon thousands of workers and the colony is becoming crowed.  So crowded in fact, that many of the workers cannot sense the presence of the queen.  This triggers the swarming tendency and the workers begin raising a new queen.

Like in most households, there is no room for more than one queen!  So, prior to the new queens emergence, the old queen swarms – taking with her between one-third and one-half of the colony.  Before leaving to establish a new hive, the bees gorge themselves on nectar.  You might witness this as a whirling swarm of bees flying across the landscape or as a swarm settled on a bush or branch.  I personally have seen them settle on swing sets, fence posts, propane tanks, patio furniture, and corn stalks.

The clumping occurs from the workers gathering around the queen (remember they are attracted to her pheromone).  For one, they are protecting her because she is vital to their survival.  And two, they are feeding her with the nectar they gorged on before swarming.  Because the queen is not the strongest of flyers, they must stop at some point and rest.  While they are resting, scout bees are sent out to look for a suitable location for the colony to live.  Swarms will not usually rest in a location for very long.  I have seen them rest in a clump for just a few minutes up to a couple of days.  They generally move on once they have located a new dwelling to occupy.

Swarms are not dangerous.  While swarming, bees are focused on finding a new home and surviving, not attacking.  They are vulnerable and do not have a home or brood to protect.  But keep in mind, it is important to keep your distance from swarming bees, because if they feel threatened it is possible they will sting.

So, if you happen to come across a bee swarm: