Risk remains one of the salient features of commodity agriculture. We usually discuss weather or market price risk, but we also need to be mindful of policy risk. Macro-economic policy in the 1980s and more recently the Renewable Fuel Policy of 2007 are examples of policy decisions that shocked commodity prices. When I teach risk management, I tell students that risk = probability of a bad event x the severity of the event. Much of what challenges us in risk management is how to deal with the low probability but severe negative event.

Current discussion regarding NAFTA, recent withdrawal from the Trans-Pacific Partnership, and other looming threats make trade disruption increasingly probable events. However, if there is a sudden trade disruption in our crop sector, what happens to U.S. producers? Most economist suggest the price of our agricultural commodities could fall, perhaps dramatically. Trade disruptions may occur for a variety of reasons such as disease outbreaks, a trading partner’s economic turmoil, or war.
So here is the question. To what extent would our current farm safety net mitigate a sudden shock to crop prices due to a trade disruption?

Crop Insurance – Based on planted acres, crop insurance would protect against a price shock only if it occurred during the growing season. Since price guarantees are reset with the futures markets every year, a new lower equilibrium futures price in the following year would be used to value insurance losses. Thus, the economic adjustments to lower price levels would be unprotected by this program.
Agricultural Risk Coverage – To the extent base acres match planted acres, ARC would mitigate the decline in price, but would only cover a 10% band of crop value. ARC would provide some protection over the next few years, but the Olympic average used in ARC would gradually adjust over a 5 year period.

Price Loss Coverage – uses base acres as does ARC and protects against prices below a legislatively set reference price. If a medium term price shift occurred (3-5 years), these programs would provide a significant protection but at a high budgetary cost.

Ultimately, our farm safety net is not designed for such a shock. Maintaining trade flows and reducing barriers to trade has a strong economic justification. There are clear benefits to consumers and agricultural producers.

Reuters recently reported that Russia has placed a ban on numerous food products from the U.S., the European Union, Canada, Australia and non-EU member Norway. Cattle (live and feeder) and lean hog futures are sharply lower, most likely a result of the move by Russia. The geopolitical unrest in the region has been looming over markets since it became front page news, but this move directly impacts the agricultural sector.

U.S. livestock markets are reacting in a negative way to Russia’s trade ban on food products. This is not surprising. The larger impact on the hog/pork market is trickling into the cattle/beef market. Both on are edge given that prices remain at record levels, with even the slightest hint of sour demand news providing the fuel for a pull back. 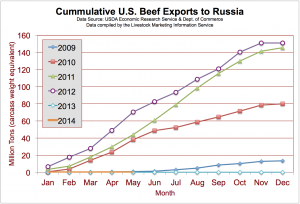 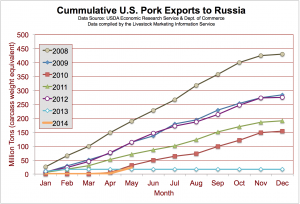