With a looming farm bill debate, crop insurance stands as the largest single component of the crop farm safety net.  The program provides risk protection from low yield or revenue in return for a premium that producers pay.  These premiums were subsidized by the USDA on average about 63% across all programs in 2016.  The total cost of the subsidy in 2016 was approximately $5.85 Billion.  Figure 1 provides a bit of historical perspective on acres insured and total crop insurance subsidy.  Beginning in the early 1990s a series of legislative changes increased subsidy levels and acreage insured has trended up as well.  We note that recent declines in subsidy primarily result from reduced crop value as prices decline from historic highs. 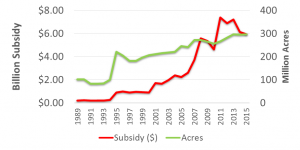 In the next farm bill debate the amount of subsidy for crop insurance is likely to be a topic of discussion.  A frequent question posed to economist sounds something like this, “If we change the subsidy structure what will happen to crop insurance participation.”  This question has been asked and answered numerous times.  In most, but not all studies, the conclusion has been that crop insurance demand is inelastic.  That is, the percent change in participation will be less than a percentage change in subsidy.  However, many of those studies are older and may reflect a different era of crop insurance.

In this report, we examine some key data associated with RMA corn and soybean program participation.  We do not estimate an elasticity, but rather show evidence of a consistent pattern in in how much farmers are willing to pay for crop insurance.  We use the dramatic changes in crop value between 2011 and 2016 and variation in riskiness across regions to show a remarkable constant in crop insurance demand.  We find that across periods of high and low crop value and across regions of low and high risk – corn and soybean farmers are willing to pay out-of-pocket no more than four percent of the expected value of the crop.  If this is true, it has implications for the demand for crop insurance when subsidy is changed.  We do not provide a theoretical explanation for this finding but believe it may be tied to the degree of risk aversion and farmer budget constraints.

We begin by examining variation across region in the base county premium rate.  The maps in figure 2 and 3 show wide variation the level of yield risk across growing regions.  While most producers purchase revenue insurance, regional variation in premium rates are largely driven by yield risk. 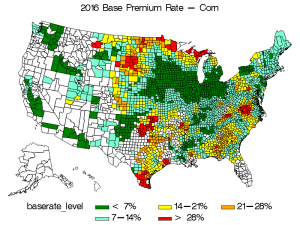 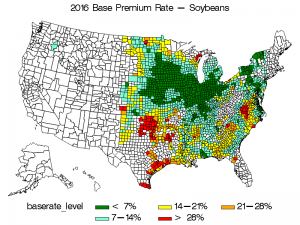 Next we examine the amount of insurance chosen by corn and soybean producers.  Figures 4 and 5 reflect the acre-weighted average coverage level chosen in each county.  We use coverage level to represent the amount of insurance chosen by those who participate in the program.  When figures 4 and 5 are compared to figures 2 and 3, a pattern begins to emerge. Areas of the country with lower per-acre base premium rates also tend to purchase higher coverage levels than areas with higher base premium rates. 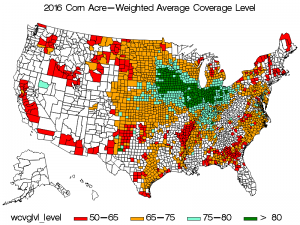 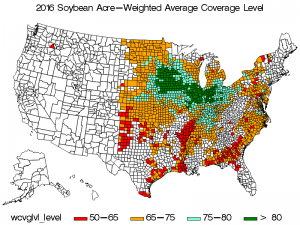 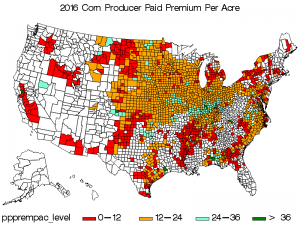 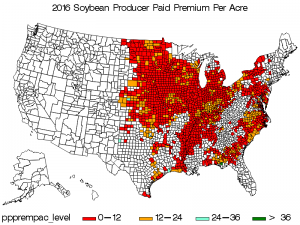 Figures 8 and 9 divides the average producer paid premium by the insured value of the crop to compute the percentage of expected crop value farmers opt to pay in producer paid premium.  This reveals our primary finding.  As can be seen in both figures, the majority of counties are shown to pay between one and four percent of the value the crop in 2016.  Thus, we find that farmers appear to be willing to pay a premium of about four percent of crop value and no more. 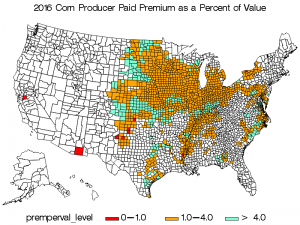 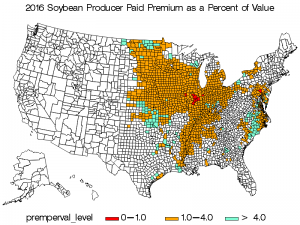 To test the robustness of our results in 2016 we also conduct the same analysis using data from 2011.  These results are shown in figures 10 and 11. Note that higher crop price in 2011 resulted in expected crop revenue more than 30% higher in that year than in 2016.  However the premium paid as a percent of crop value maps look quite similar to that of 2016.

While we find quite robust results, it is not clear why producers seem to spend such a constant percent of crop value on crop insurance.  Most likely it is related to the out of pocket cost associated with this program and the perceived benefits. We suggest that models of insurance demand consider the possibility of a budget constraint on crop insurance demand.  Ultimately, the consistency of these results suggests that if crop insurance costs rose past four percent of expected crop value, the producers would reduce insurance expenditure – most likely by reducing coverage levels. 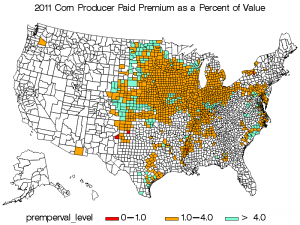 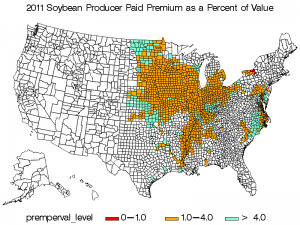 Many have suggested generic base was moving to peanuts.  Nationally, only 8.7% of generic base has moved to peanuts.  However, that shift is more common in Southeastern states where peanuts are a larger player such as Alabama, South Carolina and especially Georgia where 59% on generic base went to cotton.

First off, let me introduce myself. My name is Josh Maples, a new Assistant Professor & Livestock Extension Economist in the Agricultural Economics Department at MSU. I will be focusing on Livestock economics which will allow Brian Williams to spend more of his time on crops. I grew up on a cattle farm in Elkmont, AL and graduated from MSU. I just completed a PhD in Agricultural Economics at Oklahoma State University in December 2016 where I focused on Livestock production and marketing.

We are always looking for ways to be more helpful to producers. As I get started here at MSU, I’ll be looking for ways to improve and add to the information that you need. If there is anything that you would like to see from a livestock marketing or production standpoint, please let me know at josh.maples@msstate.edu. I look forward to meeting many of you in the coming months and working with you to make sure we at MSU are providing you with the information you need.

Now, on to this week’s cattle market update…

[ … For Livestock Prices and Production data and trends CLICK HERE …  **Please note: there is quite a bit of missing data this week due to the limited reporting during the holidays**]

Corn was down last week with Greenville cash corn currently trading $0.01 lower than a week ago and $0.35 lower than a year ago at $3.48/bu on Friday. December futures contracts are $0.02 lower on the week at $3.53/bu. Nationally, about 61% of the U.S. corn crop is harvested, behind a year ago and behind the five year average of 62%.

December wheat futures are down $0.07 from a week ago at $4.15 while Greenville wheat prices are also down $0.06 on the week at $3.75/bu on Friday. Mississippi producers have 17% of their wheat crop planted, well behind a year ago and the 5-year average of 27%. The U.S. winter wheat crop is progressing well with 79% planted, slightly behind last year and the 5-year average of 82%.

Cotton prices finished the week lower with South Delta cash prices trading $1.50/cwt lower than a week ago at $68.57/cwt and $6.80/cwt higher than a year ago. Nearby cotton futures are higher with December cotton futures closing at $69.07, down $1.50/cwt from last week. Mississippi producers currently have about 81% of the state’s cotton crop harvested, ahead of a year ago and the 5-year average of 72%. Nationally, 39% of the cotton crop is harvested, slightly ahead of the 5-year average of 37%.