Special Note: News over the weekend reports that the U.S. and Japan have agreed in principle to a deal that would reduce tariffs on U.S. beef exports to Japan. There are few details now and the agreement is not formal yet, but overall it is great news for the beef industry. I’ve discussed how important a deal with Japan would be many times in this blog (see here, here, and here). More to come as more information is released…

The Tyson Fire is now two weeks behind us and we are starting to get a better picture of the impacts on markets and production. This week’s newsletter will be more visual than usual because I think these graphs tell the story well. As shown in the graph above, the boxed beef cutout value has increased sharply since the fire. This, combined with the lower cattle prices shown below, has led to some very large margins for packers which is a strong economic incentive to figure out a way to offset the loss in packing capacity. 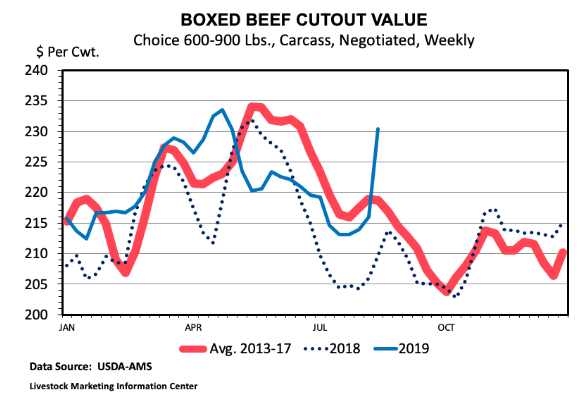 Perhaps the first thing that most cow/calf or stocker producers notice is the impact on feeder cattle prices. The action in the futures market was clear, but so has been the drop in auction prices over the past 2 weeks. 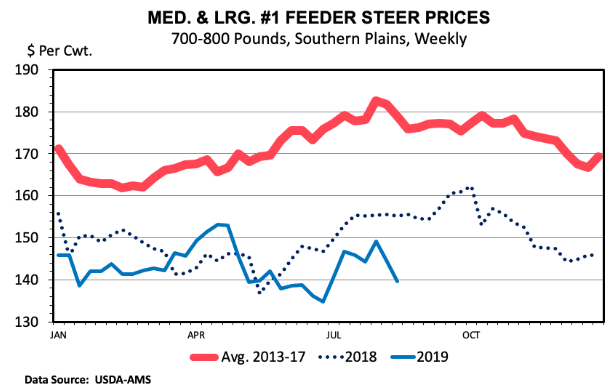 The same declines occurred in the live cattle market shown in the graph below. The rationale here is that live cattle prices would have to be cheaper due to the temporary lower slaughter capacity. 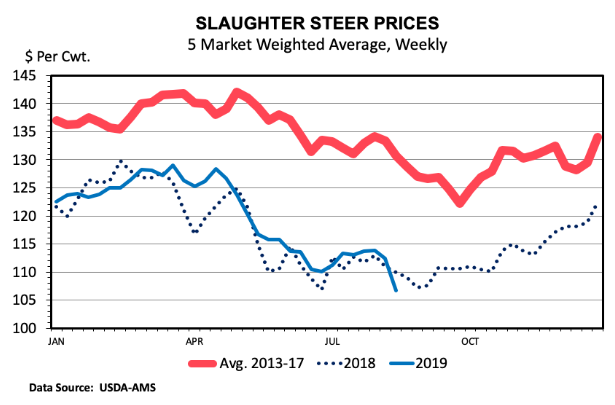 This next graph is where things get interesting. Even with the temporary closure of the Tyson plant, total cattle slaughter last week was up nearly 2 percent from a year ago and higher than in the weeks prior to the fire according to USDA-AMS data. 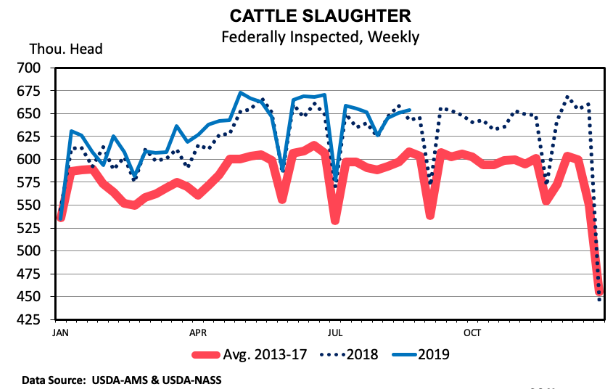 There are plenty of reactions to this information. The first is likely, why did cattle prices drop so much? After all, wasn’t it the fear of less slaughter that was the culprit for the significant declines? Another reaction could be that the markets reacted in a way that kept cattle and beef moving through the supply chain.

My reaction is a little of both with the understanding that there are a lot of moving pieces. The markets certainly reacted in the directions that we should expect given a shock to the supply chain (see Dr. Jayson Lusk’s analysis on that here). The magnitude of the change is the debate – a debate that is being conducted every day in the futures markets. September feeder cattle futures closed today at $136 which is only about $2 lower than the day before the fire. This supports the idea of now that we have more information, we are not as bearish on prices.

One point to keep in mind is that U.S. packers as a whole were not running at 100% capacity pre-fire and thus there was some room to absorb some of the loss. This is also “total cattle slaughter” and not just steer and heifer slaughter so it will be worth looking at the breakouts in coming weeks. It could have been more costly processing that was not being used pre-fire such as adding extra weekend shifts, but the high margins since the fire likely made even the most costly processing “worth-it.”

All else equal, I expect beef values and cattle prices to revert to more normal ratios as time passes, especially given the evidence that the capacity is still possible.