Wow, what a week. The fire at the Tyson and the crop production report pushed markets into a frenzy during the first few days of the week. Fears of a slowdown in slaughter pushed beef prices higher and live cattle prices lower. This drove up the margins for packers and gave a strong incentive to absorb some of the lost slaughter caused by the fire. Choice boxed beef prices increased by about 10% percent in one week.

There was plenty of talk about overreaction of markets on Monday and Tuesday. The argument can be made that cattle prices should not have dropped as much as they did. The fact that futures prices rebounded on Wednesday supports that idea. But markets don’t have to be “exactly right” in the short-term to still be efficient in the long-run. Market adjustments are typically very subtle but when a shock such as this fire occurs, wild swings happen.

Markets react to news in a way that allows products to go to where they are most demanded. In this case, the higher packer margins incentivized plants to increase slaughter in order to offset some of the loss from the Kansas plant. This is a primary reason that weekly slaughter totals will not be 5,000 head lower while the plant is closed even though that is the report of what the Tyson plant was processing each week.

I do think this is a short-term shock, but a significant shock. The underlying fundamentals of the beef sector have not changed so much that we should expect this impact to persist in the long-term, especially once the plant comes back on board. 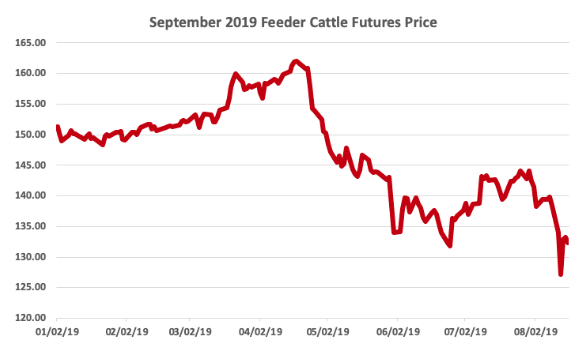 I want to close with the following is an excerpt from Dr. Derrell Peel at Oklahoma State which I think is very well-written.

“The complex set of markets in the cattle and beef industry are all impacted initially.  Live and feeder futures dropped sharply for two days before beginning to moderate late last week.  It is one of the functions of the futures markets to anticipate the worst case scenario, especially in the face of much uncertainty, before moderating as the reality of the situation becomes clearer.  Feeder cattle markets also decreased in the face of lower fed prices and the uncertainty roiling all markets.

Is the initial reaction an overreaction?  In one sense yes, but it is a very common market response to reestablish supply and demand balance quickly.  We see it in all markets and certainly in agricultural markets. Corn prices of $7/bu. in 2012 helped ensure increased corn production to overcome drought impacts and meet growing corn demand; and $3/cwt. calf prices provided the temporary incentive to jumpstart herd expansion in 2014.  By virtue of extreme initial reactions, markets ensure that equilibrium in supply and demand is reestablished as quickly as possible. The sudden shock of the current situation and the resulting big initial market reactions encourage buyers and sellers to change plans; incur additional costs; and react quickly to new arbitrage opportunities.

What should we expect going forward?  Similar situations from the past may provide some indications.  In December, 2000, a ConAgra beef packing plant in Garden City burned completely; never to reopen.  Subsequent research confirmed initial reactions generally similar to the current situation.  Most of the negative impacts on fed cattle prices subsided in three to six weeks after the event.  Packing capacity relative to cattle supplies is somewhat tighter this time so the impacts may be slightly larger or longer-lived.  Nevertheless, boxed beef and cattle markets will likely adjust relatively quickly in the coming weeks with final adjustments depending on the duration of the plant closure.”