There were no big surprises in the recent July 1 Cattle Inventory report. The beef cow herd was estimated to be the same as a year ago while the number of heifers held back for replacements was lower than a year ago. These estimates were in line with what was expected following the January report. 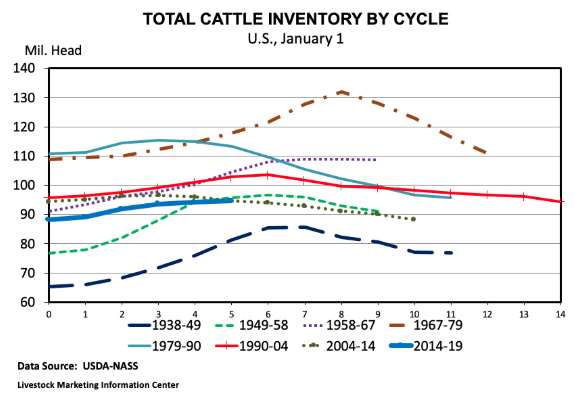 There has been plenty written about the current cattle cycle topping out and this report was another piece of evidence supporting that story. The July report marked the fourth consecutive January or July report that showed less than one percent growth compared to the previous year. While still not a decline, these modest or flat growth numbers are a contrast to the rapid growth from 2015-2017.

Cattle on feed are at record large levels that would be expected at the peak of a cycle. However, dressed weights have moderated over the past few years and especially in the past few months which has softened some of the impact of larger cattle inventories on total beef production. June marked the ninth consecutive month that federally inspected steer dressed weights were lower than the previous 5-year monthly average. This is pretty rare given that dressed weights have been increasing for decades but not too unusual when in the context of the current cycle. The same streak of declines occurred in 1996-1997 which was the peak of the 1990-2004 cattle cycle and there was also a similar period in 1984 which was near the peak of the 1979-1990 cycle.

While it is fairly clear that the cattle numbers have leveled out (at least for now), the story is different for beef. The natural lags in the cattle and beef sector cause beef production to peak later than cattle do. Beef production will continue to be bigger for the next few years while these supplies work through the beef supply chain.