Cattle feeding closeouts turned negative in June for the first month in 2019. The Livestock Marketing Information Center (LMIC) calculations show the June closeout was -$60.66 per animal sold for feeding-out a 750-pound steer in a commercial Southern Plains feedlot. Similarly, calculations by Iowa State University (ISU) for steers placed as yearlings and calves and sold at slaughter-weight in June were also negative. ISU calculated that steers placed as yearlings and sold in June generated a loss of -$39.71 per head (including manure credit), and animals placed on-feed as calves came in at -$100.61. For yearlings, the LMIC calculations showed that before June, the last red ink was for September 2018, while ISU last estimated a negative profit in December 2018. 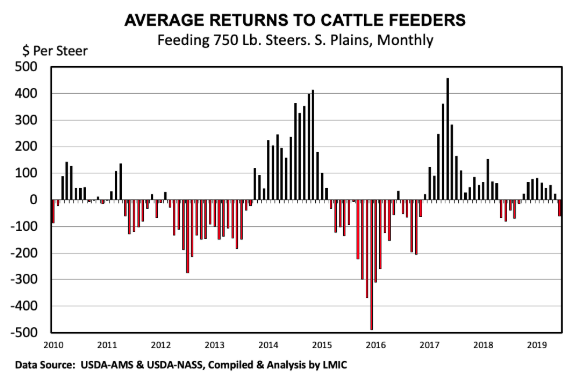 Neither the LMIC nor ISU estimates are survey-based. But they do provide indications of the direction of change. Of course, late 2018 and the first several months of 2019 many cattle feeders had much worse results than these calculations, which are based on normal weather. Very muddy feedlot conditions resulted in red ink for many cattle feeders. The baseline production systems and assumptions for the LMIC and ISU are different. Besides using different prices and costs, ISU incorporates, for example, Modified Distillers Grains in the ration, which is a common feedstuff there.

The LMIC makes projections for breakeven sales prices in coming months based on recent feedstuff costs, etc. A steer reaching market weight in July (placed at 750-pounds) has an estimated breakeven sales prices of about $111.25 per cwt. August’s breakeven level is projected to be similar to July’s. So, closeouts for July and August are likely to bring more red ink. If feedstuff costs do not skyrocket, cattle feeders are expected to generally breakeven or post small profits late this year. In the situation where corn cost is already locked-in, November breakeven sales price is in the range of $105.50 to 106.50 per cwt, and December is $111.00 to $112. Current Live Cattle futures prices (shown below) are about $109 for the August contract and $114 for December.

This article was written by the Livestock Marketing Information Center with some additional information included. LMIC is a cooperative effort between state university extension specialists (including me), USDA economists, industry cooperators, and LMIC staff. For more info about LMIC, click here.