Range and pasture rated in either good or excellent condition as of July 7 stood at 69%, according to the USDA’s National Agricultural Statistical Service (NASS) in their weekly crop weather bulletin. Last year, 51% of pasture were judged that favorable. At the other end of the spectrum, 8% of pastures were rated in poor to very poor in the latest week compared to 21% a year ago. The commentary from USDA-NASS that accompanied their estimates of crop plantings, released in late June, noted that this was the wettest June for the lower 48 States since 1995. It was the wettest spring on record for Kansas. This spring was among the top 10 wettest on record for three Plains States (Nebraska, Oklahoma, and South Dakota) and five Midwestern States (Illinois, Indiana, Iowa, Missouri, and Wisconsin). 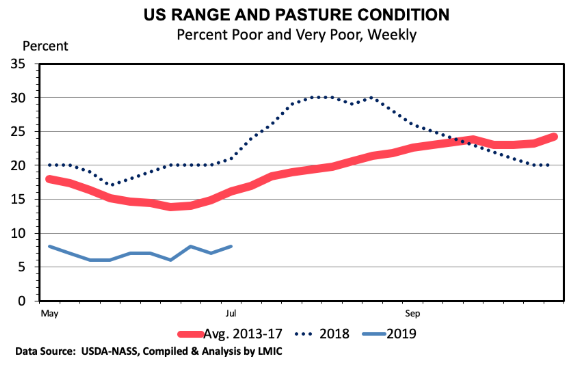 Ample, economical, forage supplies have been impacting decisions throughout the live side of the supply chain. Beef cow slaughter was up by a small percentage during the first three months of the year but jumped up to a 9% increase in April. May beef cow slaughter returned to year-earlier levels, and weekly slaughter in June has followed a similar pattern. The flow of cattle into feedlots was up 9% from a year earlier in April but ebbed to a 3% decline in May.

Will abundant pasture forage have an impact on breeding stock inventory decisions?  The plunge in calf prices is hard to ignore.  Steer calves at Oklahoma City weighing 500 pounds dropped $22 per cwt. from April to June.  Last year, the decline over the same interval was only $7, and in 2017, calf prices went up $3.  In 2016, however, monthly average calf prices were down $26 from April to June.  The last year that pasture ratings were close to this year was 2015 (66% of pastures rated good and excellent). The beef cow herd added a million head that year.  Calf prices declined $6 from April to June, but they averaged $285 per cwt. in June, compared to $161 this June.

This article was written by the Livestock Marketing Information Center which is a cooperative effort between state university extension specialists (including me), USDA economists, industry cooperators, and LMIC staff. For more info about LMIC, click here.