The first half of 2019 has been a wild ride for cattle markets in the Southeast. A seasonal rise to start the year pushed Mississippi steer prices above 2018 levels where they remained for several weeks into April. However, quickly following was a rapid decline to levels below year-ago. Seasonality was the undercurrent but was far from the only driver. Cattle markets usually find a peak in March or April followed by a decline into the early summer. This was the case this year, but the speed and magnitude of the 2019 decline was brow-raising to say the least. A bearish April Cattle on Feed report, continued large supplies, weaker export totals, and the recent corn market rally left cattle markets without much good news into May and June. 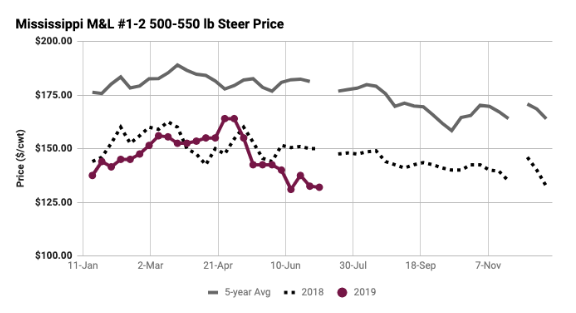 More recently, the news has turned more positive for cattle producers driven in-part by a drop in corn prices and positive pasture conditions. There is evidence that futures markets may have found their seasonal lows. Nearby and deferred live and feeder cattle contracts pushed a little higher last week. The nearby August feeder cattle contract settled at $138.83 which was nearly $7 higher than the low 2 weeks ago.

Large beef supplies are still a major piece of the market puzzle. U.S. cattle slaughter for the first half of 2019 was about 1.1 percent above a year ago. However, lower cattle dressed weights have helped to moderate beef supplies. While cattle slaughter was up 1 percent, beef tonnage produced was only up about 0.2 percent compared to the first half of 2018. Those are small percentages but equate to a large amount of beef.

The wet Winter and Spring in the Southeast and around the country have led to relatively few drought concerns. On a national scale, pasture conditions are some of the best on record. This should provide some strength to cattle markets and some flexibility for producers on how they fill those pastures. As always, managing cost of gain is critical in the summer and fall months and probably will have a bigger impact on final profit per animal than any other factor.

Looking ahead, U.S beef production is forecasted to be up about 2.5 percent in the third quarter and flat in the fourth quarter compared to a year ago (there is one more slaughter day in 2019 quarter 3 versus 2018). Domestic beef demand is expected to remain rather strong and while exports have been lower than 2018 levels to start the year, USDA currently forecasts a strong finish to the year could push 2019 totals barely above 2018.

Where feeder cattle prices go in the second half of 2019 is going to be heavily dependant on the corn market. Current forecasts are for 2019 third quarter feeder steer prices to be about $10 per cwt below 2018 levels. Fourth quarter prices are forecasted to be about $5 lower than year-ago levels. For those looking to sell calves in the Fall, continuing to watch the markets is important this year. This could be a year when some selective market timing might pay-off more so than usual due to the potential volatility overflowing from the corn market.