The latest Cattle on Feed report showed 11.7 million head of cattle in feedlots with capacity of 1,000 or more head. This was a 1.6 percent increase over last year and the largest June 1st total on record going back to at least 1996 when the series began.

Placements were down about 3 percent compared to a year ago. This decline was fueled by stronger placements in March and April of this year as well as an especially large May 2018 placements number to which the 3 percent decline is comparing. Marketings were up about 1 percent over year-ago levels. All of these estimates were pretty well-anticipated pre-report.

While there are record numbers of cattle on feed, feedlots are still current. There does not seem to be a large number of ready-to-market cattle sitting in feedlots waiting for better market conditions. The primary indicator of this is the falling steer dressed weights. The latest weekly data show steer dress weights five pounds lower than a year ago and about 10 pounds below the 5-year average for the week. This is an indicator of that marketings are current because if there was a large backlog of market-ready cattle, we would expect steer dressed weights to increase. There are indications that these lower weights will not last. The higher corn prices combined with exceptional grazing conditions are leading to economic incentives to add as much weight as possible prior to the feedlot stage of production. Heavier placements generally lead to heavier fed cattle.

A look at live cattle prices shows a continuing weakening of prices. The 5-market live cattle price dropped to $110.48 per cwt for the weekly average last week which is the lowest since October 2018. Perhaps surprisingly, this is still higher than year-ago levels when live cattle dropped to their 2019 lows of around $107 per cwt. The August Fed Futures contract closed at $102.50 today which is near the contract low from last week. Trading has continued to force futures lower which is putting pressure on cash prices to follow. Weaker beef demand than is usually expected during the summer is hurting prices due at least partially to cooler and wetter weather. The boxed beef cutout value is about one percent lower than a year ago with particular weakness is the higher-value cuts of the rib (-4.4%) and loin (-8.8%) primals through the first 3 weeks of June. 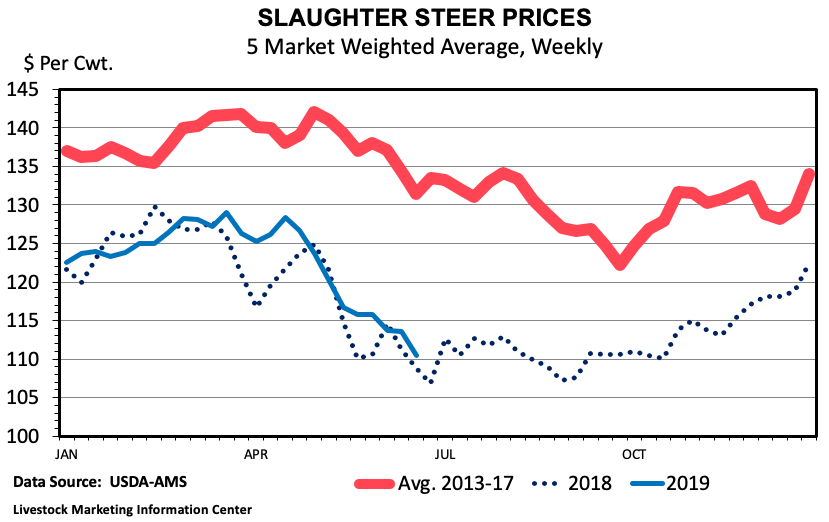 Where do live cattle prices go from here? It is hard to say anything with much confidence right now without a better estimate of what corn prices will do. Barring worse news from the corn market, below $100 per cwt just doesn’t seem likely for a very long period of time though the August futures are trading near it now. But 3rd quarter live prices will face pressure with larger supplies and higher feeding costs and are likely to average lower than $111 per cwt seen in the 3rd quarter of 2018.