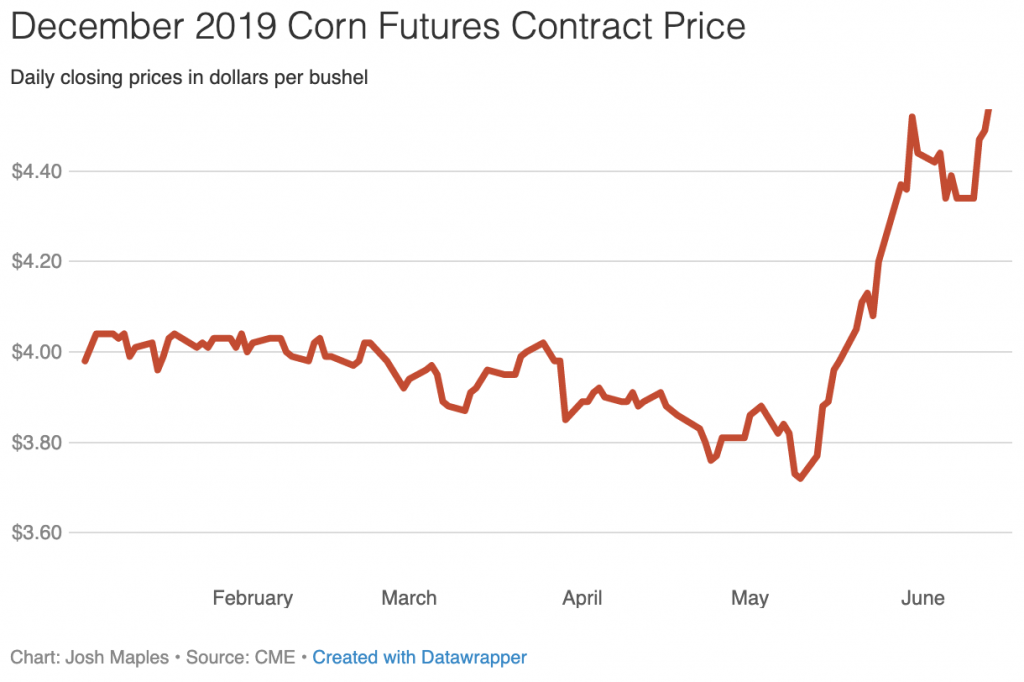 It was only 2 months ago that I wrote the following headline in this newsletter: Large Estimates Push Corn Prices Lower. Included in that article was the story was that many farmers were planning to swap form soybeans to corn due to soybean price concerns and that the estimate that there should be plenty of corn this year is positive for feedlot demand.

Things can change in a hurry.

The happenings in the corn market remain a big story for livestock producers as historically slow plantings in the Midwest have led to concerns of lower 2019 production. This has pushed corn futures prices up and put pressure on cattle markets. The wet winter followed by a wet Spring, especially in the Midwest where most of the corn and soybeans are produced has led to slow and late plantings for a significant portion of the crops.

USDA last week released their latest supply and demand estimates. In this monthly report, the forecast for corn was a 1.4 billion bushels lower 2019 production total than was projected just a month ago. This pushes the 2019 corn production forecast down to 13.7 billion bushels which, if realized, would be the lowest since 2015.

While the planting totals are catching up, at this point it is more about the timing of planting rather than percentage. The ideal planting window for corn ended weeks ago. As farmers start to plant corn after the first week of June, it’s riskier because there is less summer available for that corn to grow. It also leads to the worries of an early frost or severe weather of any sort in the summer being potentially more damaging than usual since the crop was late getting planted.

The cattle sector is directly impacted by what occurs in the corn market. Less corn leads to higher feed costs. For the cow/calf producer or stocker or backgrounder, this means that not only are feed prices likely pushed higher, but also the price of the calf is likely pushed lower.

Many cattle producers are likely considering booking corn or feed for the future in fear that prices may rise. This strategy can be a good risk management strategy but the mechanism for booking needs to be considered. If a futures contract or a forward purchase priced based on a futures contract price is used, that price already reflects the current level of uncertainty about 2019 production. The reason for using this strategy would be the belief that traders are currently underestimating the future impact of the planting delays and that prices will be even higher in the future.

Another strategy would be to buy now and store corn or feed. The reason for using this strategy would be the belief that corn prices (plus storage costs) are lower now than they will be in the future when the 2019 crop is realized.

Or there is the strategy to not try to book anything in the future just yet. The reason for this strategy would be the belief that corn prices have run up too far over the past few weeks and that the production impacts won’t be as bad as traders believe.

There is no clear correct answer right now. Corn is in a weather market and that is nearly impossible to predict. If the weather cooperates and there are great growing and harvesting conditions the rest of the season, USDA could be revising that corn production back up again in a few months.