The latest USDA Cattle on Feed report included the quarterly feedlot inventories for steers and heifers. An estimated 4.5 million head of heifers were on feed on April 1st which is the largest April total on record and the largest total for any quarterly report since January 1, 2001.  The number of heifers on feed was up 7.6 percent year-over-year while the number of steers in feedlots was down 1.1 percent compared to the same time last year.  The mix of heifers and steers in feedlots provides some information about the overall herd changes. During the past 5 years of expansion, heifers in feedlots averaged 34.4 percent of total feedlot inventories. For the two quarterly reports released in 2019, heifers have accounted for 37.7 percent of total feedlot inventories. This information is likely an indication that heifer retention has slowed over the past two quarters. 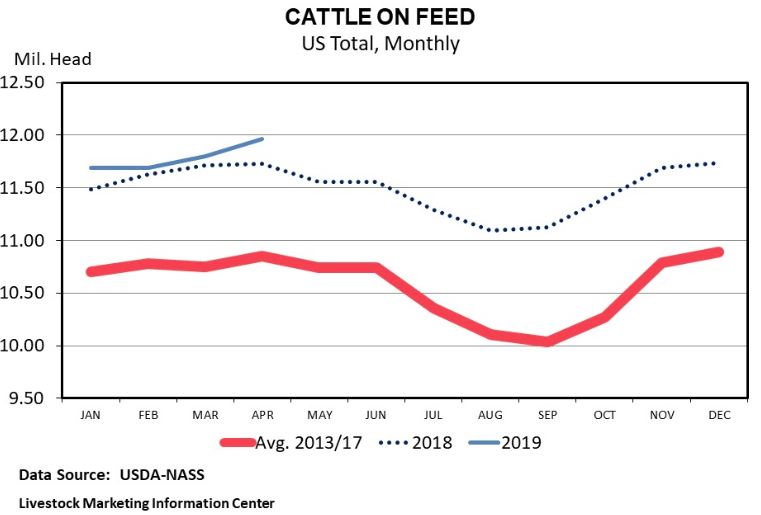 The total number of cattle in 1,000 or more head feedlots on April 1 feedlot was estimated at just under 12 million head. This was 2 percent larger than a year ago and a record April level going back to at least 1996. March feedlot placements were up about 5 percent. The weather impacts on Nebraska were shown in this report with placements down 11 percent in Nebraska.  The daily average of feedlot marketings was slightly higher in March 2019 compared to a year ago, though the report shows a 3.4 percent decrease for the month. This is due to had one fewer business day in March this year compared to 2018.