The USDA Prospective Plantings and the Quarterly Grain Stocks reports were released at the end of March and showed an increase in expected corn acres above 2018 levels. Corn planted area is estimated at 92.8 million acres which is four percent or about 3.66 million acres above last year. The 92.8 million number was on the high end of expectations going into the report. Combined with larger than expected stocks reported, there was a bearish impact on markets. December Corn futures prices dipped 18 cents in a day in reaction to the reports. 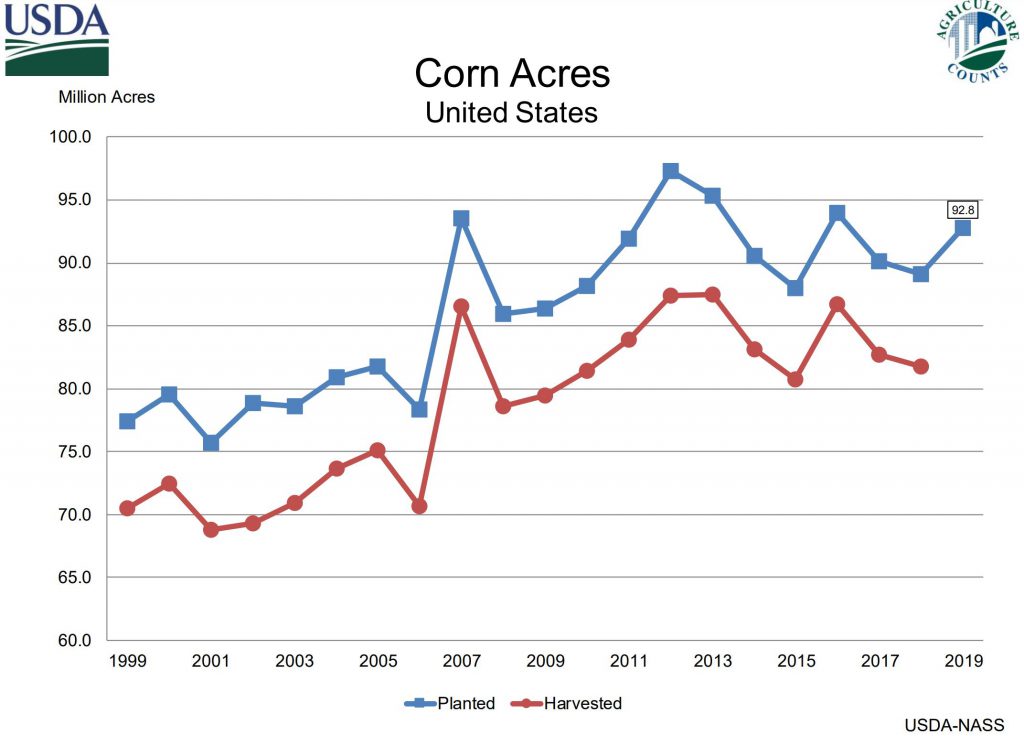 The increase in corn acres comes at the expense of soybean acreage. Soybean planted area for 2019 is estimated at 84.6 million acres which is down five percent from last year. Soybean expected margins are very tight as prices continue to be pressured by large supplies and tariff concerns. March 1 soybean stocks were 29 percent larger than a year ago and a record-high 2.72 billion bushels. It should be noted that the survey for the planning report was administered in the first two weeks of March and might not reflect the impact of the major flooding seen in many areas of the country.

So what are the implications for cattle markets? The cattle markets pay attention to corn prices because it is a primary input for adding pounds to cattle. The estimate that there should be plenty of corn this year is positive for feedlot demand. The primary costs associated with a finished steer are the cost of the calf purchased and the cost of the feed. All else equal, if the cost to feed a calf declines, a feedlot operator can pay a higher price for the calf without reducing their expected profit.

Of course planting intentions are not the same as bushels harvested. There is still plenty of uncertainty to go around as farmers navigate another crop season. Volatility in corn markets in the coming months is likely as prices are usually sensitive to weather and crop progress reports. However, the outlook for now is larger corn production and ending stocks and lower corn prices than expected just a few weeks ago.