This week’s article is from Dr. Derrell Peel at Oklahoma State University and discusses expected changes in meat production and consumption in the coming years.

Total 2019 meat production in the U.S. is currently projected to reach another record level of 103.3 billion pounds, up 1.3 percent year over year.  However, per capita meat consumption may decrease slightly to 217.3 pounds from the 2018 level of 218.6 pounds.  The decrease in per capita meat consumption reflects improved meat trade with projected decreases in meat imports and increased meat exports along with normal population growth. Total 2019 meat imports are projected to decrease to 4.3 billion pounds, the lowest since 2013, with record meat exports of 17.4 billion pounds.  Total meat includes beef, pork, broiler, turkey, other chicken, veal and lamb.

Record per capita meat consumption occurred in 2004 at 221.9 pounds. At that time lower population, higher meat imports, and meat exports less than half of today’s level were sufficient to increase per capita consumption despite lower total meat production in 2004 which, at 85.1 billion pounds, was 17.6 percent smaller than today. 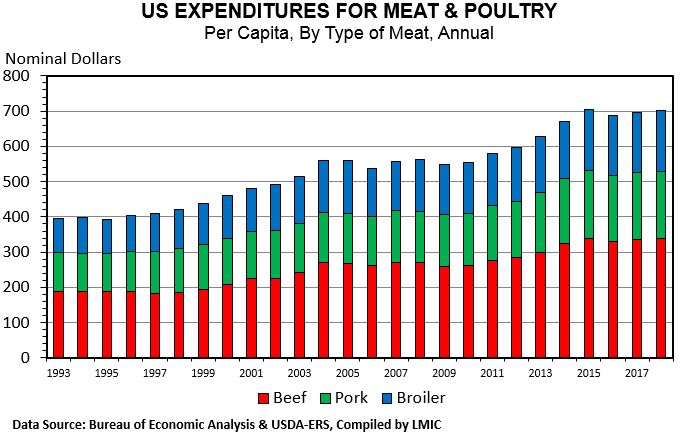 The March Hogs and Pigs report from USDA-NASS showed continued growth in the U.S. pork industry with year over year increases in all hog, breeding hog and market hog inventories.  Pork production in 2019 is projected to increase about 2.9 percent to 27.1 billion pounds.  Per capita pork consumption is expected to increase slightly from last year to 51.0 pounds per capita.  An improved pork trade balance is projected with year over year decreases in pork imports and significant increases in pork exports.  Higher projected pork exports are partly due to anticipated increases in pork imports in China as a result of losses in Chinese pork production due to African Swine Fever.

These projections reflect estimates and analysis by the Livestock Marketing Information Center and me.  Of course, the estimates are likely to change as market conditions change and new information becomes available.  Many factors may impact meat production and consumption this year including weather, disease, trade, U.S. and global macroeconomic conditions, feed markets and others.