December trade data was released on a carcass weight basis by USDA Economic Research Service (ERS) on March 7 and it showed the 2018 totals to be a record year for beef exports at nearly 3.2 billion pounds. Beef exports ended the year 10.3% larger than during 2017. You may recall that 2017 was also a great year for beef exports. Over the past year, beef exports had six months in 2018 with double-digit gains and 10 months of gains over 5%. 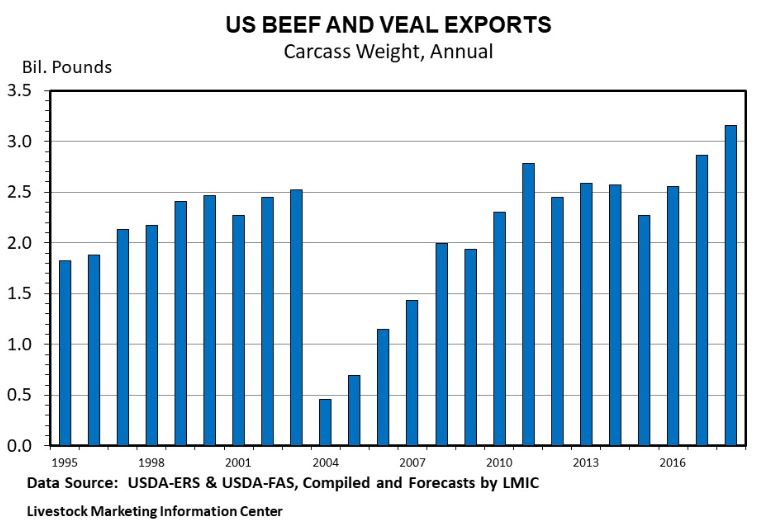 2018 was the 3rd consecutive year for export increases. The U.S. shipped 296 million more pounds worldwide, and 165 million more pounds to South Korea, representing about 56% of the growth in the year over year change. Most major beef export markets were higher with Japan almost 7%, South Korea up 35%, and Mexico up 7%. Canada and Hong Kong were the 4th and 5th largest export markets but both saw 3 and 8 percent decreases during 2018, respectively.

Beef exports have been a bright spot for the U.S. beef industry for the past few years. The growth in exports has helped absorb some of the increase in beef production during the herd expansion since 2014. Beef exports also add value because much of the export demand is for lower-value products that are not as demanded by the U.S. market.  An example is that much of the growth in beef exports has been in products from the chuck. These products have a higher value as exports and thus add more value to the carcass.