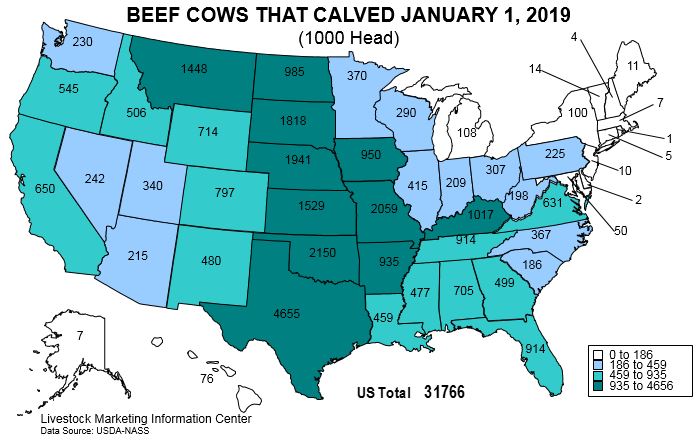 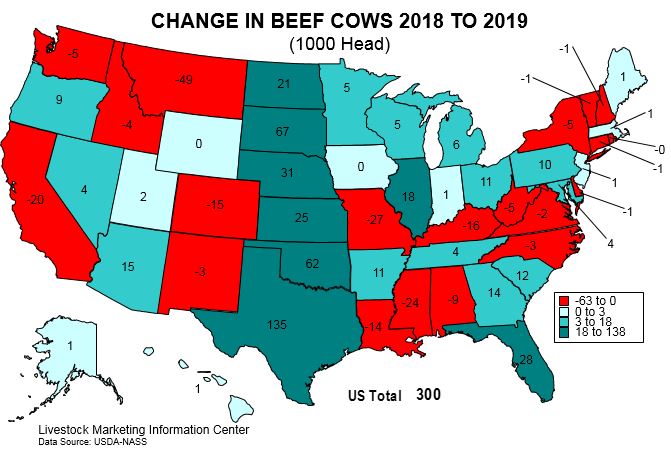 The January 1 USDA Cattle report released two weeks ago is the most comprehensive inventory report for state-by-state inventories. It provides the best snapshot of the beef cattle industry over time. In this article, we are going to dig in on some of the Southeastern states and look at recent trends We’ll also discuss methodology. The first map above shows the number of beef cows on January 1 by state and the second map shows the change in beef cows since last year.

I think it is important to first briefly mention the methodology USDA uses to collect and estimate these numbers. The inventory numbers are based on survey responses. These surveys include mail, online, and face-to-face surveys, but the primary mode is by phone. For the 2019 report, about 36,000 U.S. producers were surveyed. Since not all producers are surveyed, there is sampling error to consider (this is similar to political polls) and the goal is to minimize the error. Overall, the estimates are not perfect, but they are very good and by far the best publically available.

Looking at the first map, it is no surprise that most of the cows in the U.S. are in the middle of the country. Texas is the largest at 4.7 million head which more than doubles 2nd place Oklahoma for the number of beef cows that have calved. Most of the Southeastern states fall into the lighter shade of green category with between 459,000 and 935,000 head of beef cows.

The second map shows that the Southeastern states were split between small expansion and small contraction for the number of beef cows. Florida was the biggest gainer while Mississippi showed the biggest decrease. The map also shows that in general, the bigger states got bigger while it was a mixed bag for the other states. Missouri, Montana, and Kentucky were the only states in the top 10 to have lower beef cow inventories when compared to last year.

Mississippi ranks 26th for the number of beef cows that have calved at 477,000. This was down 24,000 head from a year ago and had the largest percentage year-over-year decrease of any state with more than 15,000 beef cows. That sounds bad until you consider that the 2018 report showed Mississippi had one of the largest percentage increases when compared to 2017. I suspect the previously mentioned sampling error comes into play here because I don’t see much evidence for a 5 percent growth during 2017 followed by a 5 percent contraction in 2018. Over the past 12 years, the lowest Mississippi beef cow inventory year (468,000 in 2015) and the highest inventory year (503,000 in 2010) were only 35,000 head apart. Looking at the longer trend, steady is the term to use for Mississippi beef cow numbers.