The January Cattle on Feed report released last week estimated the feedlot activity during December 2018. Placements were the surprise of the report as the came in 1.8% lower than a year ago when the general expectation was for a 2% increase. It seems that weather and muddy feedlot conditions kept placements lower than would have been seasonally expected. Weather is definitely impacting at least some of the cattle flow this year. One impact at this point on markets at this point is that weather is impacting the flow of cattle into feedlots. This is seen in the lower placement numbers than seasonally expected during the last months of 2018. That can at least in part be attributed to poor feedlot conditions. December was the fourth consecutive month with placements lower than the year prior. This will affect the supply of market-ready cattle in the Spring months and also probably suggests larger placements of cattle this Spring. It seems the futures market is paying attention to this as the April and even June Live Cattle contracts are trading at a pretty significant premium to the August contract. 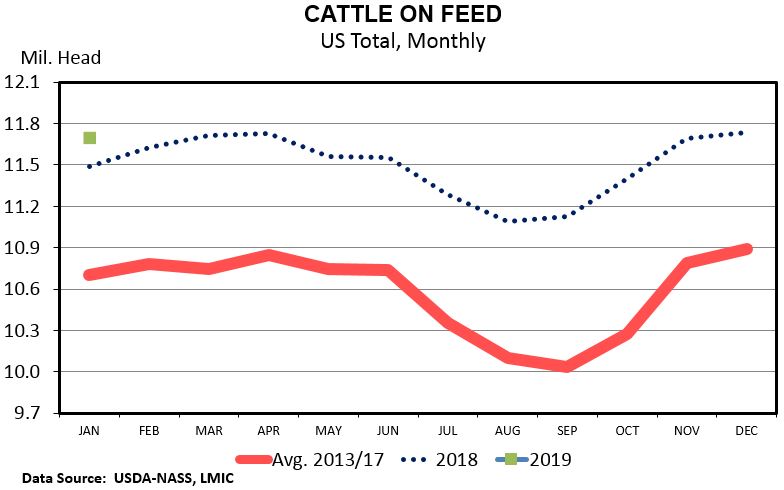 The January COF report is mostly positive for prices, but likely doesn’t really move the needle much because of the delay. We are just now getting information on what happened in December. The true value in this report is that it sets a baseline for expectations for the February report to be released next week.

The USDA Cattle report coming this week is perhaps the most important to producers in the Southeast. It is the most comprehensive cattle supply report released throughout the year. This is the report that estimates total cattle inventory and breaks down inventory by state and class as of January 1, 2019. It will also provide a Cattle on Feed number for all feedlots, not just the 1,000 head or above like we get in the monthly reports. The large majority of analysts are calling for a close-to-flat cow herd growth during 2018. Any deviation from that would be a pretty big surprise. I’m looking forward to that report for many reasons including the estimates for herd changes within states.