Cattle markets overall have shown impressive strength despite larger supplies during 2018. Feeder steer market averages have been near level or slightly stronger than 2017 levels in many markets over the past few months even in the face of larger calf supplies. USDA-AMS reported national feeder and stocker receipts were around 15 percent higher during August-October 2018 as compared to the same three months during 2017. Moving more calves at level or higher prices is a testament to the current demand-driven environment.

Larger supplies are indeed a big factor. Beef cow slaughter has been running above year-ago levels for nearly all of 2018. USDA-AMS reports about a 12 percent increase in the number of cull cows and bulls sold since the beginning of July 2018 when compared to the same period last year. Some of this is due to a larger U.S. cow herd leading to there simply being more potential culls. Low margins for dairy producers forcing more dairy cows into the slaughter mix is another factor.

While prices have been low already, we are now in the time of year when we typically expect lower cull prices. Cow slaughter is seasonally higher during the last three months of the year as producers make cull decisions prior to winter. Combined with winter usually being a slower ground beef demand time of the year, there usually is not much cull market strength until we get closer to Spring.

This dynamic makes cull decisions a little more complex this year for many producers. Wintering a cow that you do not plan to keep is generally something producers are not keen to do. But that may not be the case in certain instances this year – especially for producers who have been waiting for a cull price rally to sell over the past few months without reward. Culling, even at current prices, will still make sense for many (probably even most) producers once the cost of carrying a cow through the winter is considered. But for producers with relatively low marginal wintering costs, this is at least a year to crunch the numbers. 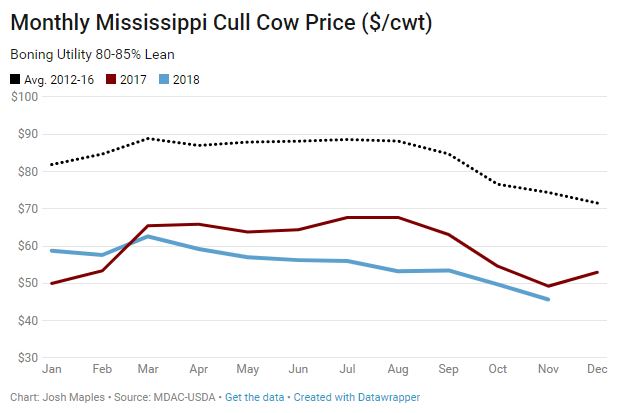