As Farm Bill conferees meet, the House of Representatives and Senate Bills are estimated to spend near current levels over the next ten years — essentially a zero-sum game of shifting priorities.  Consistent with the zero-sum game being played in Congress right now, we asked respondents to reallocate the USDA pie rather than shrinking or adding to USDA spending.

We find the average U.S. adult. U.S adults desire to spend about the same as currently spend supporting farmers – in fact they support a slightly increased shared of the total USDA budget – from 18 to 19%. Though slight in percentage terms, this increase corresponds to an annual increase of $1.4 billion.

The biggest percentage change desired by American adults is that they would increase conservation programs from 7% to 22% of the total USDA budget.  That is a three-fold increase.  Our results show that survey respondents primarily wanted to take funding from nutrition programs.

Finally, the survey findings indicate a desire for increased spending on “other programs” which were summarized as encompassing research, marketing and regulatory activities, rural development, and food safety.  Because the survey addressed such a broad set of areas, it did not dig deeper into desired spending in subcategories. We hope to do follow up research on what was in the ‘other program’ category that led to a desire for increased funding? 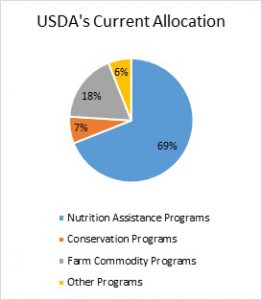 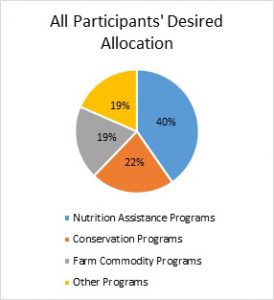