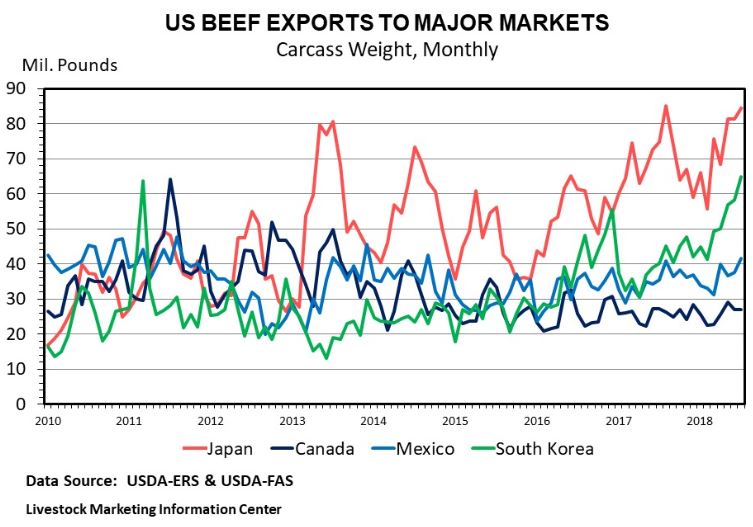 USDA’s Economic Research Service and Foreign Agricultural Service released the most recent monthly trade data last week. The big story is continued large beef exports. For the month of July, exports were up 16.8 percent over July 2017. For January-July, beef exports were 15 percent higher than the same period a year ago.

U.S. beef exports to Japan and South Korea continue to lead the way in terms of volume. Beef and veal exports to Japan totaled 84.3 million pounds in July which was 12.9 percent larger than July 2017. Japan continues to be the largest export market for U.S. beef but South Korea is where the most rapid growth is occurring. Exports to South Korea during July were up 61.1 percent over July 2017 and year-to-date exports are up 45 percent. Japan and South Korea have combined for nearly half of the total beef exports so far in 2018. Add in Hong Kong, Taiwan, and Vietnam and the share of U.S. beef exports that go to Asian countries is about 65 percent. Mexico and Canada are the third and fourth largest export destinations and have combined for 24 percent of 2018 U.S. beef exports.

Imports were down slightly from a year ago and are very near 2017 year-to-date levels. Canada, New Zealand, Austrailia, and Mexico are the four largest and combine for 86 percent of total imports. Austrailia continues to deal with drought impacts which have reduced the amount of beef imported.