The latest USDA Cattle on Feed report was released this past Friday. This report included estimates for the number of cattle placed into feedlots, marketed out of feedlots, and the total number of cattle on feed for the month of July ending on August 1, 2018. 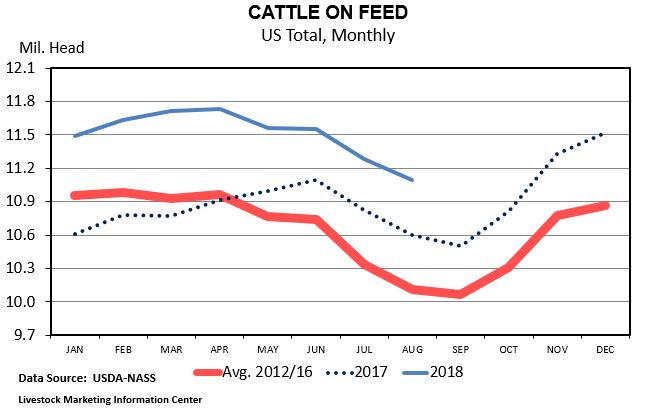 The report showed a 7.9 percent increase in cattle placed during July 2018 as compared to 2018. This was higher than the average pre-report expectation of a 5 to 6 percent increase but was within the range of estimates. While the total number of placements might get the most attention, perhaps the most interesting information lies in the weight categories.

The less than 600 pounds category was up 13.9 percent over last July and the 600 to 699 category was up 23.4 percent. This increase corresponds with the increased auction receipts of lighter weight feeders in July. The total increase of cattle placed weighing less than 800 pounds was 135,000 head or 13.8 percent over July 2017. Placement of cattle weighing more than 800 pounds was about the same as a year ago.

Marketings were up 5 percent over July 2018 which was very close to pre-report expectations. There was one additional slaughter day in July 2018 as compared to 2017 so the daily average was approximately the same. While we continue to see record large number of cattle on feed, the marketing rate is mostly keeping pace and working through the large supplies.

The summer has been a bit surprising in the continued large number of placements. Back in the Spring, the large number of lightweight cattle placed provided evidence for projected similar to year-ago total cattle on feed numbers by August and September. The rationale was that those larger lightweight placements earlier in the year would lead to fewer heavier cattle to place in the summer. However, continued large placements have occurred and total cattle on feed is still pushing 5 percent above year-ago levels as we head into the seasonally heavy-placement Fall months.