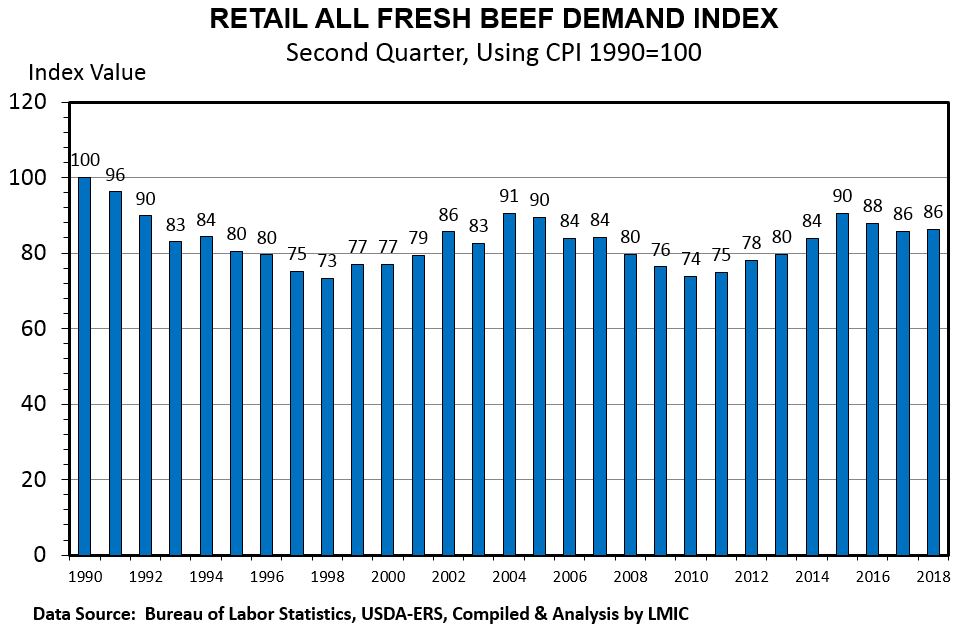 Domestic consumer demand for beef was very good in the first quarter of 2018 and also for the second quarter of 2018. The beef demand index chart above shows an index increase of about a half percent (2017 was 85.8 and 2018 was 86.2). We use index values because beef demand is difficult to measure and understand. Both price and quantity matter to demand. For example, 2015 was one of the lowest years for beef consumption per person but it was actually a relatively strong year for beef demand. That is because beef prices were high. Therefore, this index approach attempts to account for both pieces of the equation.

The stronger demand is a positive shift in the estimated demand relationship. What happened in the first quarter was classical, though not always obvious, economics. Compared to a year earlier, the Consumer Price Index deflated retail beef price (“all fresh” price as calculated by USDA’s Economic Research Service) was 2.1% above a year ago while the per capita disappearance (retail weight) slipped by a much less than expected 0.1%. So, the demand profile increased year-over-year but was below 2015 and 2016. Importantly, that demand measure for 2018’s first quarter was the third best since 1992.

Looking ahead regarding U.S. consumer beef demand, the question is will U.S. economic growth slow-down? More specifically the concern is if this slowdown will occur as early as the second half of 2019, since production/breeding decisions that would impact cattle supplies during that timeframe are already in place. The other demand concern is large domestic supplies of competing meats and poultry, specifically pork and chicken, and their impact on beef demand. Besides the export market being a factor, as to how much is available in the domestic market, an economic slow-down tends to influence demand for beef more than competing sources of animal proteins, which are less expensive.

This post includes information from the Livestock Marketing Information Center.