The following article is from the Livestock Marketing Information Center. It discusses an interesting topic about which I have spoken with many of you at various meetings. After years of dramatic price swings (high volatility), markets have settled significantly to lower levels of variability. While the article uses Oklahoma City as an example, the story is true for markets across the Southeast. 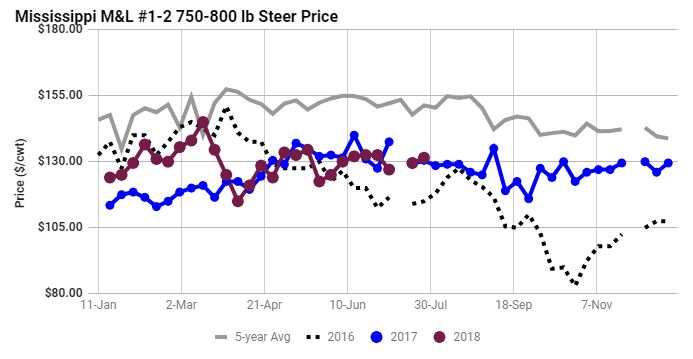 By the numbers, cattle producers with summer stockers and cow-calf operations should be experiencing a bit less stress about the market this year. Yearling steer prices (750- to 800-pound at Oklahoma City) averaged $145.13 per cwt. during the first six months of the year, up from 138.68 over the same months in 2017. The same comparison for steer calves showed this year’s average price for the first six months at $176.98 per cwt. compared to $167.37 over the comparable span last year.

The increase in value was achieved while price swings in the market have subsided. The spread between the low and high prices during the first 26 weeks of 2018 was $17.77 per cwt. for yearling steers. Last year, the swing in prices from the high to the low for the same weeks was $34.82.

Yearling steer prices at Oklahoma City (750- to 800-pound, medium and large frame #1) in the latest week averaged $151.67 per cwt. The low monthly average price so far this year was $139.90. Given the price volatility that has been seen in the market in the first half of the year, an annual price range of $15-$20 has the highest probability, which infers that the chances for prices above $160 would not be a strong bet. It is also worth noting that the high monthly average price so far this year is only $149.29, making the current cash price look very good versus the monthly average to-date.