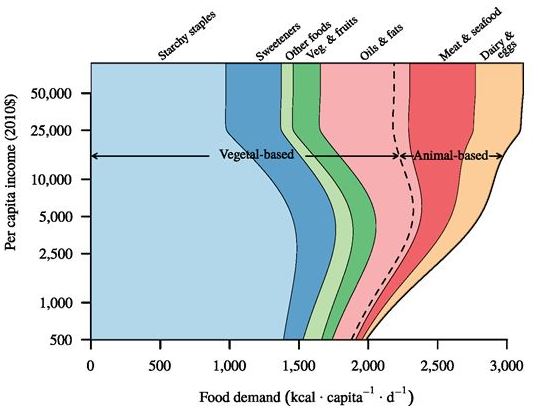 The figure above comes from an interesting new article published in the American Journal of Agricultural Economics. The authors use consumption data for seven food categories in more than 100 countries (including the U.S.) to see how food demand changes with income and population. In particular, let’s look at the area shaded red in the figure which refers to meat and seafood. The figure shows that as income increases, consumers demand less starchy staples and more meat and seafood among others. Within this meat and seafood category is beef.

Not only do consumers demand more meat, but also more food in general. Note that at a per capita annual income of $500, consumers food demands are just below 2,000 calories per day and very little meat and seafood. For consumers with incomes greater than $25,000, demand increases to over 3,000 calories with significantly larger meat and seafood demand. Those may sound like low annual incomes to U.S. readers, but the average for the countries used was just over $15,000. Here is a link to per capita incomes around the world if you’re interested.

This research is especially insightful for beef and other protein producers. This figure explains why growing middle classes in other countries can boost beef sales. Think of a country with a low but growing per-capita income (hello China at $17,000). Now project out what demand for meat will be for that country over the next decade or more as incomes rise. The authors take a stab at this, too. They project that between 2010 and 2050, demand for meat and seafood will double due to income and population effects. While increased population matters, the biggest driver for this category is projected to be the income effect.

We’ve all heard (and probably used) the projection of needing to feed 10 billion people worldwide by the year 2050 as support for agriculture in general. However, for animal protein producers, that number is compounded by the expected rise in incomes as countries develop. This also suggests that perhaps the biggest demand growth for meat will occur outside the U.S. – in countries that have the most room to grow their income.