Placements came in basically flat when compared to May of last year. However, the number was higher than pre-report expectations that were anticipating about a four percent decrease in the number of placements as compared to last year. The basically flat number was within the range of expectations but it was at the upper end of that range. This was likely a contributing factor in the weakness in the cattle futures markets seen during Monday trading.

The placements number has been tricky to predict in this time of growing cattle supplies. Estimating placements relies on assumptions about how many cattle are out there to be placed and the factors that might cause cattle to be placed in one month or the next such as price and grazing conditions. Grazing conditions have impacted placement timing this year and seemingly continue to do so as we saw a nearly 10 percent increase in placement of cattle weighing less than 700 pounds over last year.

The marketing rate was very well anticipated pre-report and came in at 5.4 percent above May of 2017 levels. In total, the number of cattle marketed during the month of May was 105,000 head larger than it was during May 2017. The marketing rate continues to be a bright spot for the industry as it is helping to keep feedlots current and avoid a backlog of cattle in the feeding sector.  As shown in the figure below, the daily average number of marketings continues to outpace year-ago levels and the five-year average. 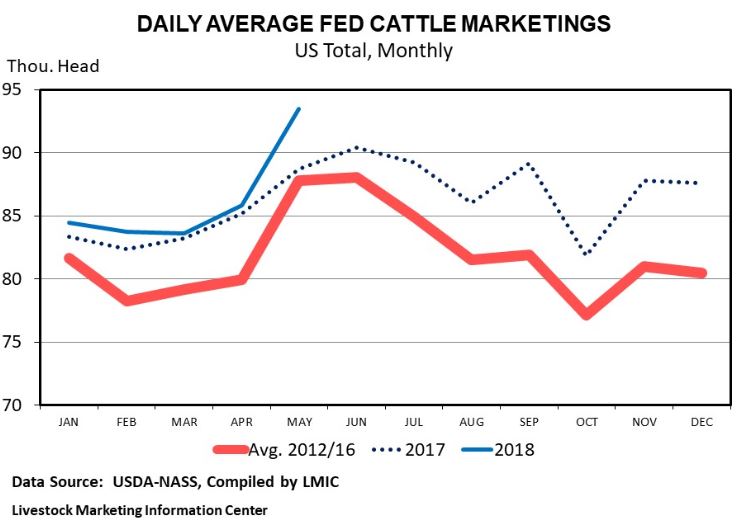