As a follow up on the international trade discussion last week, this week let’s discuss the most recent export data that was released on June 7th. Most of the analysis and comments below come from Jim Robb at the Livestock Marketing Information Center mixed with a few of my comments. Overall, beef trade around the world this year has been impressive.  For April, the U.S. and Australia lead the way regarding gains in tonnage of beef sold compared to a year ago.  In terms of value, the U.S. remained the top exporter of beef and variety meats and posted a 20% dollar-value increase compared to a year earlier.  Foreign markets for beef industry products continue to grow, especially in Asia.

At 254 million pounds, U.S. beef exports during April were 16% above 2017’s and the largest ever for that month.  USDA-ERS reported that the U.S. sold beef directly to 93 different countries during the month of April.  In order of size, the top six destinations were: Japan, South Korea, Mexico, Canada, Hong Kong, and Taiwan.  Year-over-year, large percentage gains occurred to Mexico (rising 31%), Taiwan (up 19%), Canada (increasing 11%), and Japan (up 9%). U.S. beef imports declined year-over-year by 6%.

While the focus of this newsletter is on beef, the pork exports are also of interest. Similar to the story for U.S. beef, U.S. pork production is increasing. Surging U.S. pork exports helped mitigate the amount competition beef faced at the domestic meat case from pork.  April’s tonnage was 548 million pounds (carcass weight basis), which was the largest monthly number ever.  Tonnage sold to Mexico, the largest market for U.S. pork, was record-large in April (182 million pounds) and increased a dramatic 41% from a year ago. 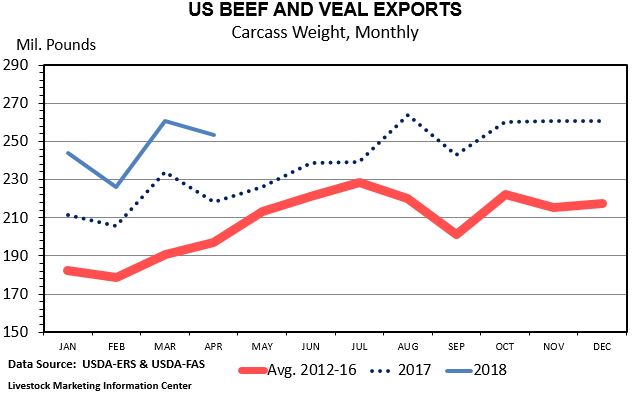 In the U.S. wholesale meat marketplace, robust exports have been a factor cushioning beef prices against large supplies.  Will that situation continue?  In the World Agricultural Supply and Demand Estimates (WASDE) issued last month by the USDA, their forecast was for U.S. beef exports in 2018 to be 3.03 billion pounds, 6% above 2017’s.  That would be the first time for foreign sales to exceed 3 billion pounds.  Year-to-date trends are on the path to reach that level.

WASDE forecasts can only incorporate “current known” U.S. policy and that of foreign governments.  Of course, in the last 30 days, the unknowns regarding trade policy and hence implication on U.S. meat exports have greatly increased.  More than just insights into actual policy changes and tariff rates are required to forecast exports.  For example, in the current world economic environment, exchange rates adjustments can have a significant impact on the price paid by a foreign buyer for U.S. agricultural products.  Exchange rates are determined by macroeconomic forces and by sectors much bigger than the agriculture and food trade sphere.  That is, exchange rates are realistically exogenous, using an economics term, to the trade of agricultural and food products.  The value of the Mexican peso could drop versus the U.S. dollar, mitigating, at least partially, the short-term impacts of any new tariffs on U.S. exports to that country. The new WASDE will be released tomorrow (June 12th) but clear-cut assessments of the trade environment may be several months down the road.