(1) The latest Livestock and Meat International Trade Data was released by USDA ERS today. Total beef and veal exports were up 2.65% during November of 2017 as compared to November 2016. Year-to-date (through November), total beef exports were up 13% over the first 11 months of 2016. Among our top 5 trading partners, exports were up 21.4% to Hong Kong, 13.3% to Japan, and 2.5% to Mexico.These increases were partially offset by export decreases of 18.9% to Canada and 5.6% to South Korea. In total, November saw beef exports of 261 million pounds and imports of 212 million pounds. 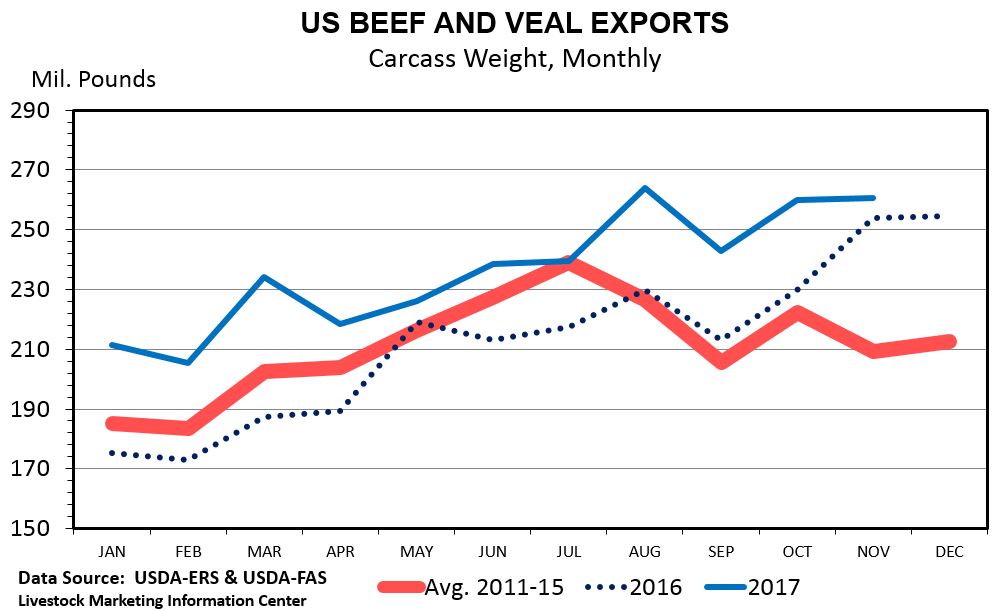 (2) The latest Cattle on Feed report showed the December 1 feedlot inventory at 11.5 million head. This was 8 percent higher or an additional 864,000 head in feedlots compared to December 2016. This is also the largest monthly on-feed total since March of 2012 and the highest December feedlot inventory since 2011. Much of the increase is due to a 20.3 percent increase in placements under 700 pounds. This report didn’t necessarily suggest that there were a lot more calves out there that no one knew existed, it just showed that many cattle were placed into feedlots at lighter weights than might have been expected. Lightweight feeders placed now will not be available for placement later. These lightweight placements will be marketed later and are not bunched up with earlier placements.