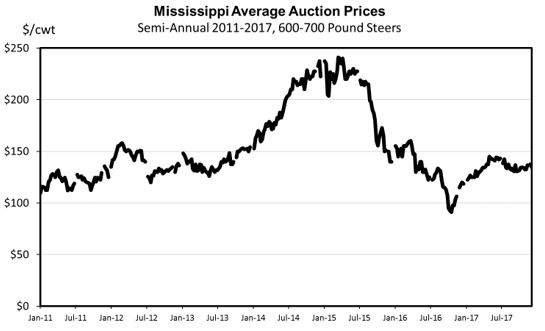 We have covered a lot of ground in the cattle industry in 2017. It was a year that exceeded nearly all expectations in terms of cattle prices. 2017 ushered us out of the market lows we saw in late 2016 – we’ve probably all tried to forget those few weeks of 95 cents/lb. for 600-700 pound steers just 14 months ago. Since then, the market has shown impressive strength in the face of larger supplies. About 1.3 million more calves hit the ground in 2017 than in 2016. Higher than expected prices in 2017 was certainly a positive sign for the cattle industry as we grapple with continued herd expansion.

We began 2017 talking about the Trans-Pacific Partnership (TPP). This was the trade deal that was would have gradually decreased tariffs on U.S. beef entering Japan, our leading U.S. export market. Of course, U.S. participation in TPP fell apart due to larger political reasons & the U.S. remains at a tariff disadvantage for sending beef to Japan. Beef trade, in general, was the storyline for most of 2017 due to trade renegotiations (or talks of renegotiation) with our biggest trading partners including Japan, Canada, Mexico, and South Korea. These four countries represent over 70 percent of the U.S. beef export market and negotiations (or discussion of negotiation) are ongoing. Despite the presence of trade discussions, our export markets flourished in 2017 and were up over 14 percent year-over-year through October. We also gained access to mainland China for the first time since 2003. Export totals to China have been modest as the market adjusts to the additional requirements for beef qualified for shipment to China.

Now is also a good time to discuss a few questions that will be critical to markets in 2018. While there are many factors to watch, I want to point to three in particular. The first and likely most important is “at what rate did expansion continue in 2017?” We’ll get a good measure of this when the annual inventory data is released on January 31st. I anticipate that expansion has continued, but not as rapidly as in the past few years. The second question is “can we continue to expand our beef export markets at a rapid pace?” I believe are export markets are a primary reason for stronger than expected prices in 2017. With even more supplies coming in 2018, can export markets exceed expectations again in 2018? The final question is “how will expansion of total meat production impact beef?” While beef production is increasing, chicken and pork production is also expanding. This has set the stage for 2018 to be largest total meat consumption year of the past decade. How will this increased production get sorted out at the grocery meat case by consumers?

If one thing is for sure, it is that 2018 will bring surprises just like every year. Here’s to hoping that like 2017, most of those surprises will be good for cattle producers. Happy New Year!