The latest monthly meat trade data were released this morning and showed further increases in the amount of beef exported in June. U.S. beef and veal exports totaled 238 million pounds during the month of June. This was about a 12 percent (or 25 million pounds) higher than June of 2016. As shown in the chart, this continues the trend of boosted exports in 2017 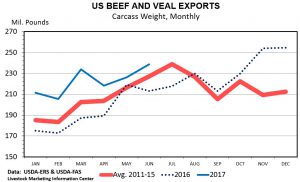 The largest increase in exports was in Japan. Nearly 8 million more pounds of U.S. beef was exported to Japan in June of 2017 than in June 2016. This further highlights the potential impact of the increased tariff on U.S. beef in Japan (discussed here). Since it takes a while to collect the data, exports under the increased tariff will not show up in trade data for another 2 months.

Second and third on the increased exports are South Korea and Hong Kong. Just these three countries make up 18 million of the 25-million-pound increase in U.S. exports over last year. There are a few countries in which U.S. exports have actually decreased this year. Canada is the largest of these as one of our primary trade partners. Exports to Canada have decreased by about 3 million pounds from June of 2016.