**Notice of Change to this Newsletter**

This Cattle Market Notes Newsletter is moving to a Monday release. The reason for this change is to provide a more accurate weekly update by better aligning the prices reported. For example, the “weekly” fed cattle prices that I have reported in past Friday editions were actually the averages for Monday through Thursday. Some full weekly averages for prices reported in this newsletter are not available until Mondays. This change will allow for comparison across more similar prices. If you have a specific need for particular prices on Fridays, just let me know and I’ll be happy to help. You will receive an email from me on Monday, July 24th with the new-and-improved weekly Cattle Market Notes newsletter. Until then, below is a special edition of the newsletter discussing the mid-year cattle inventory report released this afternoon. 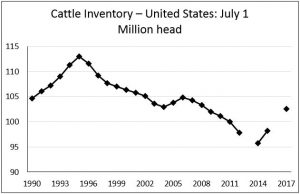 The July 1 Cattle Inventory report showed a 103 million head total for all cattle and calves in the U.S. Compared to other July inventory reports, this one ranks as the largest since 2008 in terms of total herd size.

This July report is more difficult to measure than usual because we don’t have a July 2016 report for comparison. This clouds measures of herd expansion. Comparisons of the herd size between the July and January reports should be done with extreme caution as the methods used are different and the reports are at different times in a seasonal industry. The July report will always show a larger number of total cattle because significantly more calves are born in the Spring than in the Fall.

In summary, this report tells a lot of what we thought we already knew. We are going to have more calves flowing through the system than we have had in a decade. However, demand has outpaced supplies in the first part of 2017 to provide support for stronger prices than many expected. That storyline will remain a key driver of prices in the second half of 2017.