Crop insurance continues to gain importance which is reflected in the 2014 Farm Bill. Given the extreme weather events in the past few years, coupled with price uncertainty, U.S. producers are aware of the pitfalls of not having insurance. However, many options exist with respect to the level of coverage a producer can obtain. At the minimum a producer can purchase “CAT”, or catastrophic coverage, that will protect up to 50% of his crop if a loss occurs. In all areas of the U.S. producers can “buy-up” to higher levels of coverage with some locations having the option to insure up to 85% of their crop [1]. Coverage levels for crop insurance increase from the 50% level to the 85% level, in 5% increments. The maps below show the average level of coverage for each county in the U.S. where crop insurance purchase data are available.

A few patterns stick out. First, it is noticeable that with corn and soybean insurance producers in the Cornbelt (primarily Iowa, Illinois, and Indiana) buy-up to higher levels of coverage. This is not surprising since the uncertainty around yield is small relative to other regions, which implies the insurance product is typically less expensive (in other words, the premium is cheaper [2]). Also, with respect to revenue insurance products, given that the bulk of these two crops are produced in this region there is a ‘natural hedge’ relationship between yield and price. So, when yield is low prices are high and vice versa, which provides a smoother revenue outcome compared to other locations. As a result these premiums are typically less than in other regions.

Also, we notice that coverage levels are low (averaging from 50% to 70%) in the Mid-South, southern Georgia and South Carolina, and the southwestern U.S. This is most likely the result of the inverse that was noted above. In these instances yields are less certain and typically carry a higher premium which decreases the incentive to buy-up to higher premium levels. More specifically, across all crops, the counties in eastern Arkansas and Louisiana (with some spillover in to the boothill of Missouri) as well as the counties from southeast Alabama through southern South Carolina, the coverage level is consistently very low (50% to 65%). 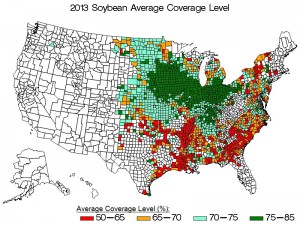 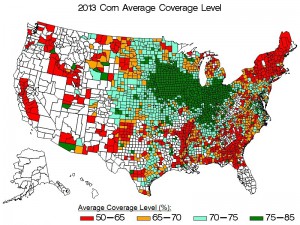 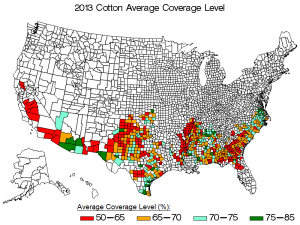 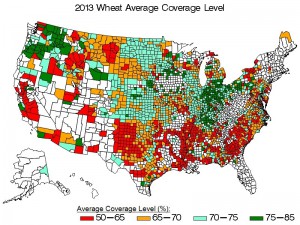 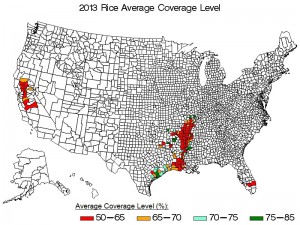 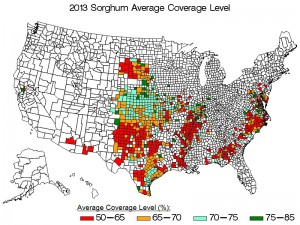 [1] In relation to an automobile insurance policy, this would imply the producer’s crop insurance carries a 15% deductible whereby a $20,000 vehicle with a $1,000 deductible would equate to a 5% deductible.

[2] Again, using the automobile insurance example, the premium for a 40 year old female driver will be less than a 18 year old male driver since the younger male is typically more reckless behind the wheel and therefore poses a higher risk for the insurance company. Here the older female is the Cornbelt and the 18 year old is the southwestern U.S.